Bolanle Ambode: One half of the new Lagos Power Couple 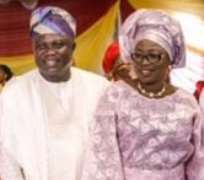 If there is a Nobel prize for First Ladies in Nigeria, how many would have come to Lagos?

Unarguably, Lagos state has produced two active first ladies in the last 16 years. From Remi Tinubu, Asiwaju's better half who is presently a serving Senator of the Federal Republic to Abimbola Fashola, the wife and companion of the outgoing Governor of Lagos. Also, with the declaration of Akinwunmi Ambode as the winner of the April 11th gubernatorial polls, the very hard working and industrious Bolanle Ambode becomes the next first lady of Lagos state. A new addition to the noble list of the First ladies of Grace? Absolutely!

Although, many may not have seen the wife of the Governor-elect Akinwunmi Ambode frequently during the course of the campaign or oblivious of her contributions to the success of the process. However, as it's typical of women of substance, Bolanle Akinwunmi Ambode has been a huge inspiration, motivation and the force behind Mr Ambode's undying strive towards excellence.

Born into the Odukomaiya family in Epe, Lagos, on February 15, 1964, Mrs Ambode received her secondary education at St. Theresa’s College, Ibadan, Oyo state, before proceeding to the Lagos State University(LASU), Ojo, Lagos to study Physics/Mathematics. Her zeal for excellence through improving the intellect spurred her to pursue a higher degree as she applied and earned a Masters (M Sc) in Public Administration in 1994.

Interestingly, her passion for excellence could not have denied the light of love a space to shine. She met and fell in love with Mr Ambode who was then working with the Ojo Local Government Council while she was an undergraduate at LASU. They got married in 1991 and the union is blessed with a set of twins – a boy and a girl.

On her life as a role model, she has inspired many women who have hitherto been finding it hard to combine career life with raising a family. Her rich resumé reveals her career exploits, having worked with firms like the People’s Bank of Nigeria(now defunct), Instant Finance Nigeria Limited and Aguagem Consulting before starting her confectionery business which required her to attend short courses in Bakery Technology in Israel. As an entrepreneur per excellence, she is presently the MD/CEO of Rehoboth Chops and Confectioneries Limited where she's matching experience with results.

As an embodiment of a supportive wife, mother , professional and business woman, Mrs Ambode continues as a model for aspiring industrious women in all walks of life -- whether they're involved in running businesses at Balogun market in Lagos Island or within the corporate ladder pursuing a professional career, etc. In addition, the St. Theresa’s College Old Girl shares the passion for charity with Mother Theresa as it is evident in her regular donations to various orphanages within the Lagos metropolis.

Quite emphatically, Mrs. Ambode will be able to utilise her professional skills as an administrator, business owner and philanthropist to support and address pressing issues affecting women in the state as way of complementing her husband's "Next Level" project. In fact, her professionalism and experience will contribute to improving the welfare of Lagosians.

With a masters degree in public administration and intellectually gifted in her own right, Mrs. Ambode can subtly steer, council, advice and support her husband when difficult administrative decisions need to be made. With these qualities, Mrs Ambode can be described as the Nigerian Hilary Clinton. Also, considering the experience and intellectual capability of the Ambode's, it is safe to say Lagos state is about to witness an era of unprecedented economic, social and cultural growth. One that can only be likened to that of America under Bill and Hilary Clinton.

Undoubtedly, we can say with a bit more certainty that Lagos state, with the Ambodes at the helm of affairs, will be safe in capable hands.