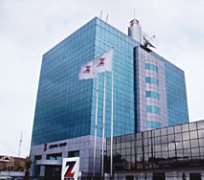 Zenith International Bank Plc has posted a turn over N113 billion in its first quarter (Q1) operations, against N94 billion recorded in the corresponding period in 2014.

Specifically, the banks unaudited result presented to the Nigerian Stock Exchange (NSE), showed 20 per cent growth in gross earnings which stood at N113 billion for the first quarter ended March 31, 2015 from N94 billion achieved during the same period in 2014.

Profit before tax (PBT) appreciated by 14.6 per cent to N33 billion up from N28.9 billion in the comparing period of 2014. Similarly, profit after tax (PBT) performed better as it grew by 17 per cent to N27 billion from N23.6 billion resulting in earnings per share (EPS), which rose to 88kobo from 75kobo translating to 17.3 per cent, increase.

Interest income for the period rose to N81 billion compared with N71 billion posted in the similar period of 2014 translating to 14 per cent increase.

Non-interest income appreciated by 39.5 per cent N31.9 billion up from N22.9 billion in 2014. Operating income rose to N72 billion as against N66 billion in the similar period of 2014 translating to 9 per cent growth while operating expenses of N39 billion was recorded amounting to 4.8 per cent increase from N37.6 billion reported in the corresponding period of 2014.

Analysis of the bank's balance sheet showed a rise in gross loans and advances to N1.9 trillion implying 9.9 per cent appreciation when compared with N1.7 trillion posted in the similar period of 2014. Similarly, customers' deposit and total assets increased by 5.7 per cent and 4.9 per cent to N2.6 trillion and N3.9 trillion respectively during the period.

'The year 2015 has high prospects of increased economic growth and development, following the successful conduct of general elections in the country.

This scenario will present the group with ample opportunity to grow its clientele and business volume in Nigeria while consolidating on its gains from foreign subsidiaries.'

He explained that with the growth in gross earnings to N133 billion in the first quarter of 2015, his bank has demonstrated its leadership position within the Nigerian banking landscape. He asserted that despite the headwinds faced by the Nigerian banking industry the bank grew its PBT by 14.6 per cent to N33 billion during the period, attributing the achievement to excellent customer service offered by the bank.

According to him, 'The group's focus on creation of well-priced high-quality assets is evident in the YoY growth of loans and advances by 44.6 per cent with a moderate cost of risk of 0.5 per cent and non-performing loan (NPL) ratio of 1.7 per cent.

The growth in risk assets (priced to maximise returns) was effectively matched by a corresponding increase in competitively priced deposits with a view to maximizing net interest margin. With a loan-to-deposit ratio of 67.3 per cent, Basel II capital adequacy ratio of 18.82 per cent and liquidity ratio of 44.4 per cent, Zenith group is well positioned to explore business opportunities in strategic sectors of the economy.'

Meanwhile, financial analyst from FBN Capital Limited have expressed optimism that the result would attract positive reaction by the market, stressing that it will likely increase its forecast on the bank to move upward slightly. 'We expect consensus forecasts to be flat to slightly up.

As such, we would expect a positive reaction by the market to the results,' the first reaction from FBN stated. Highlighting the significant improvements made by Zenith Bank in the report, FBN Analysts noted that, 'The PAT growth was faster than PBT growth of 15 per cent y/y because of a significant positive result (N1.1billion) on the other comprehensive income line'.