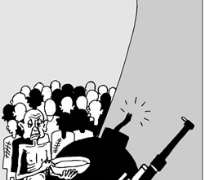 Africa is fast becoming a territory scarred by the frequent massacres of innocent souls by Islamist terrorists bent on spreading their reign of terror to every nook and cranny of the continent. After a significant reduction in the frequency of internecine feuds and warfare, terrorism is fast taking over as the major agent of destabilisation on the continent.

Yet, each time the terrorists strike, rather than serve as an opportunity to galvanise the leaders into finding a lasting solution to the problem, it only exposes the vulnerability of the continent to further attacks. This is a cycle that must be broken to pave the way for the much-needed development and economic prosperity of the continent.

In the most recent of such attacks, about 148 students, mostly girls, of Garissa University College in North-Eastern Kenya, were killed by heavily-armed gunmen, who forcibly gained entrance into the campus after eliminating the security guards on duty. The attack, said to have been carried out by members of the Somalia-based al-Shabab terror group, also left 79 students injured, while about 500 others managed to escape. Reportedly shouting, 'We came to kill or finally be killed,' the four free-wheeling gunmen, who targeted mainly Christians, later blew themselves up by detonating their suicide vests.

Prior to the attacks on the campus, the group, whose name translates as 'the youths' in Arabic, had earlier staged another bloody attack on a shopping mall in 2013, which claimed about 69 lives. These two are perhaps just the major attacks by the group which routinely wreaks havoc on a regular basis on many parts of the country. Part of Kenya's 'crimes,' according to al-Qaeda-affiliated al-Shabab, is that it carries out raids in Somalia to stop the group's frequent cross-border abductions of foreigners in Kenya, where tourism is a major source of foreign exchange earner.

Before the recent upsurge in activities of al-Shabab, al-Qaeda had in 1998 struck at the United States embassies in Kenya and Tanzania, claiming more than 224 lives, including those of 12 Americans, in what were then described as the bloodiest terror attacks in that part of the continent. Neighbouring Kampala, the capital of Uganda, has had its fair share as 74 people were killed in two blasts that occurred where people gathered to watch the 2010 World Cup finals.

Prior to the North-Eastern part of Nigeria becoming the epicentre of terrorism, no thanks to the activities of Boko Haram, there was the reign of al-Qaeda in the Maghreb, an al-Qaeda franchise which consistently plundered the northern parts of Africa. Their activities culminated in the capture of the whole of northern Mali in 2012. The capital, Bamako, was already under threat before they were flushed out by combined forces of France and other West African countries, including Nigeria.

Even though terrorism had been very active in other parts of the continent before coming to Nigeria, the exploits of Boko Haram within the past six years tops whatever had been seen on the continent before. With the benefit of weapons carted away from Libya after the fall of Muammar Gaddafi and the ones from Mali when the battle-hardened terrorists were dislodged from there, Boko Haram descended on Nigeria, killing, maiming, decapitating and abducting women and children. The group, which has been credited with killing an estimated 15,000 people so far, made global headlines when it abducted 276 schoolgirls. More than a year after they were taken, 219 of them have yet to be rescued even as Amnesty International said last week that a total of 2,000 children had been captured by the group.

Perhaps, the only part of the continent yet to be affected by terrorism is the southern part. But even this oasis of calm may not be completely immune from attacks. This is why these countries need to be concerned about what is happening in other parts of the continent. The operation of terrorists is not limited by borders. If Tanzania could be attacked, as was seen in Dar es Salaam in 1998, it could easily spill over to Mozambique and then down to South Africa, if care is not taken.

The continent should forge a formidable alliance against terror. As the situation in Nigeria has shown, when countries work together, they can minimise the influence of terrorism even if it cannot be completely eliminated. Nigeria only started making an impact in the fight against Boko Haram when a joint task force was raised with troops from neighbouring Cameroon, Niger and Chad. Since the alliance got off the ground, Nigeria has recovered practically all the territory that had hitherto come under the control of the group.

It is for this reason that the US President, Barack Obama, last year mooted the idea of an African Rapid Response Partnership, in which he pledged to invest the sum of $110 million a year for the next three years. As a follow-up, the Nigerian President, Goodluck Jonathan, at a meeting with his Kenyan counterpart, Uhuru Kenyatta, promised to find a common ground to fight insecurity in their countries. But since then, not much has been achieved, even though moves are being made in this direction at the continental level.

It should however be stated that the idea of an African Force is not a new one. It is a concept that dates back to the days of the iconic Ghanaian leader and Pan-Africanist, Kwame Nkrumah, whose bid to establish the African High Command in the late 1950s failed to sail through. The reality is fast supporting the imperative of African states coming together to stop the rapid spread of terrorism before it consumes the whole continent. Although the US has been sending drones after al-Shabab leaders in Somalia, there is a limit to what outsiders can do to fight the battle for Africa. Only Africans can fight the African battle satisfactorily.