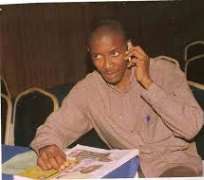 This is Citizen Ikenna Samuelson Iwuoha. He is from Imo State in Nigeria. Iwuoha is an Owerri based human rights activist who accused the Speaker of Imo House of Assembly , Rt Hon Benjamin Uwajumogu of corruption.

He has been in the Imo State prison Owerri since June 3rd 2014 on the orders of the governor of Imo State Rochas Okorocha and the Speaker of Imo State House of Assembly.

He is a political prisoner. In Imo State of Nigeria, critics of Rochas Okorocha are facing harassment, victimization and oppression .

Iwuoha survived an assassination attempt at his Ikenegbu Layout residence in Owerri after gunmen came looking for him in his home and left after killing one. Before the attack he told the world that the Speaker threatened to kill him. The Imo State police that were called in for investigation of the attack at Iwuoha's home started indiscriminate arrest of youths in the neighbourhood and detained them illegally.

Rather than conduct investigations, the police suspected to be carrying out the PLAN B of Imo State government branded the activist a cultist and charged him to court for murder so as to silence him and keep him away from the 2015 general election.

Iwuoha's wife that was detained with him was granted bail in December 2014 after 7 months in jail but the activist is still in jail.This is his 11th month in prison for committing no crime. Currently the Activist is sick and require medical attention. He is also hypertensive. The Youths against Human Rights Violation and Corrupt Practices YAHVCP, the Youths for Human Rights Protection and Transparency Initiative YARPTI and other human rights groups and lawyers have been in the struggle for the release of Citizen Ikenna Samuelson Iwuoha but the government of Owelle Rochas Okorocha has so far frustrated all efforts.

Join us in this struggle to free SAMUELSON IWUOHA. Enough is enough! Say NO to human rights violations in Imo State .Place a call to the Speaker of the Imo State House of Assembly to FREE SAMUELSON IWUOHA today . Call BENJAMIN UWAJUMOGU on + 2348084888887 or email him via his personal email [email protected]