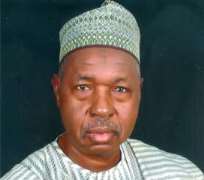 A former Speaker of the House of Representatives, Aminu Masari, has won the governorship election in Katsina State on the platform of All Progressives Congress, APC.

According to the retuning officer, seven political parties took part in the election.

“Having satisfied the requirements of the law and scored the highest number of votes, Aminu Bello Masari of APC is declared the winner and returned elected,'' Mr. Bilbis, a professor, announced.

He said the election was free, fair and conducted in accordance with the law.(NAN)