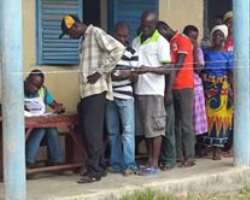 The conduct of the governorship and house of assembly elections in Akwa Ibom state has been described as generally peaceful and commendable.

Speaking after casting his vote,Mr Udom Emmanuel, the governorship candidate of the Peoples Democratic Party (PDP) expressed delight with the large out of voters describing it as unprecedented.

Emmanuel who voted at his hometown in Awa, Onna local government area of the state said though pockets of skirmishes have been reported in few areas, the security agencies were able to rise to the occasion, resulting in the success of the exercise in the state.

“Generally the election is peaceful, Akwa Ibom people have conducted themselves well, we are happy with what we are seeing and we believe that it is a sign of maturity,'' he said.

He said with the excitement seen on the faces of the voters, he was greatly encouraged about the prospects of democracy in the country.

The election was also without much tension which had characterised the presidential and national assembly elections held on March 28 as vehicular traffic was light thought movement had been restricted.

There were also not much security presence on the streets while vehicles were not checked as in previous election nor voters molested by security agents.

The polls also recorded a remarkable improvement in the arrival of election officials and materials.

In many of the polling units visited, it was observed that officials of the Independent National Electoral Commission (INEC) had arrived before 8 a.m. and had to wait for the voters to arrive for the commencing of accreditation.

In Etinan urban, accreditation began early following the timely arrival of materials and INEC officials to the extent that after the voters had been accredited, many of them returned to houses to return later for the voting proper.

Speaking with newsmen, Unyime Usoro, the chairman of the Nigeria Labour Congress in Akwa Ibom State said the early arrival of materials at the unit helped to ensure an orderly and peaceful exercise adding that it also ensured that the queues were not too long.

“This election has witnessed a remarkable improvement as the INEC officials arrived in time and this made it easy for the accreditation to commence in time and it is also easy to control the crowd,'' he said.

In many of the units, voting has been concluded while the voters were waiting for the counting and announcement of results.