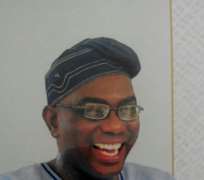 In 2007, he was acknowledged globally as a Contributor to Intergovernmental Panel On Climate Change (IPPC) Assessment Reports which won for the IPCC  the 2007 Nobel Peace Prize along with US Vice President Al Gore. This Nigerian Professor,  Anthony Olusegun Adegbulugbe who turned 60 on 2 April 2015, has had  a  checkered career in the academia,business and government spanning over 38 years.

For a young  Engineering student of  a University, taking active part in students politics, a turf   reserved for students of law, Arts , Social sciences was considered the height of unseriousness. This fellow became the Speaker of the Students Representative Council.Upon graduation, he scored  a First class with an all time record of 5 over 5 GPA in Electrical Electronic Engineering.The student then was Anthony Olusegun Adegbulugbe.The University: University of Ife, now Obafemi Awolowo University (OAU).This prodigy has been defined early.

Rising  in intellectual prowess across  his educational career in either the MIT :Massachusetts Institute of Technology Boston USA where he had his DSC  or Academic career as a lecturer and later  a re known Professor of  Energy Planning andEconomics  at his alma mater, was  therefore predictable.

Born at Ibadan on the 2nd of April,1955, Prof Anthony Adegbulugbe whose parents hails from Ondo town in Ondo state  had his secondary education at Loyola College where he passed with Distinction.He then moved on to the University of Ife now OAU where he studied Electrical / Electronic Engineering and he graduated with B.sc (Hon) in Electrical Engineering (First Class) with a Grade Point Average (GPA) of 5.0 on a scale of 5.0 June 1976. For his postgraduate  education, he attended the Massachusetts Institute of Technology (MIT), Cambridge, Mass: U.S.A.  and obtained a D.SC. in Nuclear Materials Engineering, minor program in Energy Planning and Management in June 1981. Other courses attended include Electric System Expansion Planning Course, Brookhaven National Laboratory, U.S.A -1982,Energy Planning and Management Course, Brookhaven National Laboratory, U.S.A – 1983, and International Human Resources Development Corporation, Boston Massachusetts–International Gas Business Management Certificate Program, 2006 .

After his first Job was as Pupil Engineer, at NEPA now PHCN in 1976-1977,he moved over into the Academic arena  as Graduate Assistant, later Senior Research Lecturer of the Obafemi Awolowo University Center for  Energy Research& Development from 1977 where he rose not only rose to become a Professor of Energy Economic and Planning  but was its Director / Chief Executive for a record of  13 years.

He was a more sought after Academic all over the world for his profound intellectual contributions in the area of Energy policy and planning and Climate change and was therefore on  several National and International assignments such asMember and Chairman Sub-Committee on Information Technology, Expert Group on Technology Transfer (EGTT), United Nations Framework Convention on Climate Change (UNFCCC).

As an entrepreneur and investor, Adegbulugbe was co founder of Trippe E system Associates ltd,Founder,Heptagon Ventures Ltd,Amazing Grace ltd and  Chairman of Green Energy International amongst other companies,

At a time that the nation was frantically searching for solutions to challenges in the Power sector, President Olusegun Obasanjo in 2005 appointed him as Presidential Adviser on Energy Matters  and also Chairman,Gas to Power Project, a World Bank project designed to prepare a workable interface between the Power and the Oil and gas  sectors.

The Obasanjo Administration realized the need for the development of gas  to drive the Power sector as a way of solving the Energy problem and Adegbulugbe came to the rescue with series of policy initiatives that would have made Gas available for the power turbines which Nigeria invested billions of dollars in bringing to Nigeria. One would recall that in 2006, Adegbulugbe advised on embedded power  generation policy and  also the Small Scale Gas Utilisation Programmes as solution to rejuvenate the economic development of oil producing communities.This is apart from Small hydro power projects which he suggested should utilize the various waterfalls dotted around the nation to provide  1- 2 megawatts to power small communities thus relieving the National grid and reduce Transmission losses.Pilot projects were indeed planned for some parts of Ekiti, Ogun, Kogi and Ondo amongst others.

Sadly the exit of Obasanjo in 2007 and the lack of continuity and policy reversals of succeeding administration truncated those creative policies and our match to self sufficiency in Power which still hurt our nation till today.Years after, the Government have started to return to those policies which would,today have been bearing fruits.

In addition to his position as Special Adviser to the President,Prof Adegbulugbe was  from 2005- 2007 a Member, Economic Management Team,Member of Presidential Council on Mambilla Hydro Project,Alternate Chairman, Nigerian Nuclear Regulatory Authority,Chairman, National Multi-sectoral Energy Access Committee and at a conference on Energy Access for Ecowas in Gambia,he was elected as theChairman, ECOWAS Regional Multi-sectorial Committee on Energy Access after a powerful presentation on how to empower  the rural communities for economic development using small scale energy support through  renewable energy.

Perhaps it needs to the echoed at this stage his strident effort to bring back to life of the then moribund Nigeria Atomic Energy Commission which he saw as a veritable source  of coordinating efforts to use nuclear  reactors  for power generation for the country.To him as a Nuclear expert, Atomic Energy also offers a good source of power inspite of fears over its  possible  negative uses. Indeed he led the Nigerian Delegation to the International Atomic Energy Agency conference in 2006 where Nigeria was accepted back into the fold.

After his service to the nation, as Special Adviser,Prof Adegbulugbe, for many years a part time Pastor of the CAC, made a dash in the political waters as State Coordinator of the PDP Presidential Campaign for Ondo state in 2011 on  the prompting of former Ondo Governor Late Dr Olusegun Agagu. However he quickly retraced his steps to engage fully in the service of God as a Full time  Pastor in the Christ Apostolic Church in Abuja at the District headquarters before his present posting as the Senior Pastor of the CAC All saints Chapel Citec Abuja .He sees his service to God as a his own thanksgiving for the amazing grace he has enjoyed from God Almighty.He has continued to use the pulpit as a platform to win souls for Christ through leadership by example and incisive sermons.

One remarkable attribute attested to by all  is that despite his strings of achievement in several areas of endeavor, Adegbulugbe exudes uncommon humility and friendliness which endears him to all cross section of the populace.This is apart from his eagerness to help people.His generosity and philanthropy is exceptional.

At a time when the international community applauded Adegbulugbe  as a contributor to the International Panel on Climate Change IPCC which won 2007 Nobel Peace Prize, alongside US Vice President AlGore,Nigeria has not found it expedient to tap enough from the experience and intellectual depth of this prodigy!

Ilori, a lawyer and journalist writes from Abuja