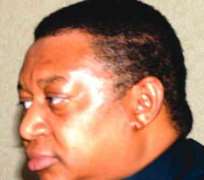 He was replaced with Alhaji Shehu Ladan who retired from the NNPC in 2009 after 19 years in service.

It was gathered that Barkindo had no prior knowledge of his impending sack, as he was present at the inauguration of the reconstituted Federal Executive Council in the Council Chambers of the State House earlier in the day.

News of his sack was conveyed to him by the Acting President at a brief audience after the inauguration ceremony.

The Senior Special Assistant to the Acting President on Media and Publicity, Mr. Ima Niboro, while announcing the development said, 'The Acting President, Goodluck Ebele Jonathan, has appointed Alhaji Shehu Ladan as the new Group Managing Director of the Nigeria National Petroleum Corporation.

'He replaces Alhaji Mohammed Sanusi Barkindo. Ladan is expected to execute the administration's vision of transforming the NNPC into a global brand and player.

'Jonathan thanked Barkindo for his stewardship and wished him well in his future endeavours.'

Born in September 1952, Ladan hails from Kaduna State and had his early education at NA Primary School, Tudun Wada, before proceeding to Sheikh Sabah College (now Sardauna Memorial College) in Kaduna where he obtained his West African School Certificate.

He obtained his Bachelors and Masters degrees in Law at the Ahmadu Bello University, Zaria. He is also an alumnus of the Harvard Business School and University of Dundee.

He joined the NNPC in 1990 and held various positions, rising to the position of Group General Manager, Human Resources in 2004.

He also served as Executive Director at the National Engineering and Technical Company and National Petroleum Development Company, both subsidiaries of NNPC

In October 2007, he was appointed the Group Executive Director, Commercial and Investment, a position he held until he retired on April 6, 2009.

Our correspondent gathered that Barkindo was relieved of his post after the Acting President was inundated by complaints about his performance.

Our correspondent also learnt that the leadership of international oil companies had also complained that they had difficulty relating with him.

Barkindo is also believed to be a non-professional in the core business of NNPC's operations, being that he was neither from the upstream or downstream sectors of the economy.

It was also learnt that the Presidency was unhappy that he had been unable to bring his claimed wealth of experience to improve the fortunes of the corporation.

Barkindo was also blamed for not finding an answer to the shortage of gas which had crippled the efforts to raise power generation in the country.