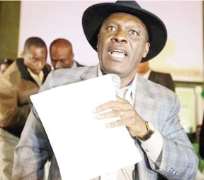 Omene Sobotie, a major leader of the Peoples Democratic Party (PDP) in Delta State, has urged the arrest and prosecution of Godsday Orubebe, a former Minister of Niger Delta Affairs, over his attempt last Tuesday to disrupt the compilation of results for last weekend's presidential polls.

Last Tuesday, Mr. Orubebe had taken a microphone at the collation center of the Independent National Electoral Commission (INEC) and openly announced that the PDP would not allow the electoral commission to finish the announcement of the presidential election results, accusing INEC chairman Attahiru Jega of helping the opposition All Progressives Congress (APC) to rig the election.

Reacting to what he described as a treasonable offences, Mr. Sobotie, a former Commissioner for Environment in Delta State, told reporters today in Asaba that he condemned Mr. Orubebe's show of shame. He added that the former minister's action was capable of plunging Nigeria into crisis. He likened Mr. Orubebe's action to the action of former military dictator Ibrahim Badamasi Babangida's annulment of the June 12, 1993 presidential election.

“What Orubebe did at the International Conference Center (ICC) during the collation and announcement of the presidential election results in Abuja was to plunge and instigate crisis that would have degenerated to the abortion of our smooth electoral process,” said Mr. Sobotie. He added that the former minister's action “is a treasonable offense and Orubebe should be arrested and tried immediately over that treasonable act demonstrated to the whole world.”

Mr. Sobotie continued: “This is somebody who was a minister of the Federal Republic of Nigeria and who knows the consequences of his unruly and unconstitutional action. Orubebe should be arrested and tried for his attempt to abort [the] democratic process. His action was intended to cause serious crisis in the country. And if Professor Attahiru Jega had got up and reacted and, in the process, these PDP overzealous supporters and members broke his head—and he was unable to continue the process—what state would this country have found itself in?

“This is the reason why former President Olusegun Obasanjo said that luckily Professor Jega was not a Humphrey Nwosu. If Professor Jega [were] a Humphrey Nwosu, may be it would have led to the abortion of the democratic process. The action of Orubebe is an indictment of [the] PDP and whoever asked Orubebe to represent the party as its agent.”

Mr. Sobotie, a former political adviser to Governor Emmanuel Uduaghan of Delta State, said Mr. Buhari's victory should be accepted as proof that Nigerians have expressed their verdict, getting the change they desired.

Meanwhile, INEC's formal announcement last Wednesday that Mr. Buhari was the winner of last Saturday's presidential election, has precipitated what one PDP insider in the state described as “a defection fever.”

The source told SaharaReporters that Governor Uduaghan and the PDP's governorship candidate, Ifeanyi Okowa, had held separate emergency meetings with party members in Asaba to avert announcements of mass defections.

“Since the declaration of General Muhammadu Buhari as the president-elect, the PDP in Delta has suffered serious underground exodus from the party to the APC. This has created serious sleepless nights and panic within the party,” our source said.

“Some strongholds of the PDP in the state across the 25 council areas have been broken. Some of our foot soldiers, aggrieved members as well as heavy weights, are said to be forming strong alliance with the APC,” the source added.

O'tega Emerhor, the APC's governorship candidate, is scheduled to be in Asaba on Sunday to meeting “some PDP bigwigs and supporters” reportedly considering switching political affiliation.