Convocation address of Dr Sandeep Pandey, who was the Chief Guest, at Indian Institute of Management (IIM-C) Kolkata 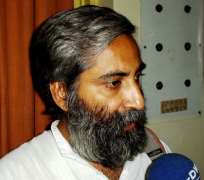 Dear friends, as you complete yet another milestone in your academic career and prepare to embark on a new professional path, I would like to offer you hearty congratulations and best wishes. Your Institute's environment and professors at IIM Kolkata must have provided you with both managerial skills and ethical values necessary to lead a life that will be professionally, socially and spiritually satisfying. However, the inputs imbibed here are only the starting point, and you will have to constantly question, assess and evolve your values and actions as you begin living in the real society. While I hope that you will take care of your professional skills, I want to share my thoughts with you about the challenges you will face on the social and spiritual aspects, the implication they will have for your professional choices, and how you could respond to them.

I will organize my thoughts by responding to some fundamental questions that arise in everyone's mind:

(i) Who we are?
(ii) How can we become happy and satisfied individually?

(iii) What is the implication of seeking happiness for our professional choices and decisions?

Who we are?
To put it simplistically, we are social beings shaped by history of nature and life, and integrated in the web of nature, society and economy. To realize this we have to only look at three facts – (a) what scientists have understood about evolution of life and human society, (b) how economies work, and (c) what our present living experience says.

Living species have evolved over hundreds of millions years through a natural process of collective adaptation to environmental changes. While environmental changes are highly random, collective adaptation response of a population of a species at any point of time is partly random too. The collective response also depends on the capabilities of that species. A species' capabilities themselves have been shaped by historical pathways of environmental changes and responses of that and other species. Even the evolution of humans as groups and societies in the past tens of thousands years is the story of how, under certain fortuitous circumstances, certain collective decisions were taken. To sum up, the set of phenomenal intellectual, psychological, cultural and physical capabilities that each one of us possesses as individual today is a product of collective decisions and actions taken in the past by populations of so many human societies and other species as responses to random environmental changes. And this is equally true of the set of unique capabilities that every species possesses.

Then, look at how the economies work. The regulated supply of money combined with the rules by which the market values various activities, determines how the money flows, from whom and to whom. Every individual is a consumer and a labourer. As a labourer he/she adds certain value to making of certain products or services. How much material wealth he/she gains depends on how much the markets value his/her skills relative to others' skills. Hence some people end up accumulating material wealth at a rate higher than others, while some people at the other extreme may even end up being pauperized. The rules by which an economic governance structure values various skills and distributes material wealth among different sections of society are heavily influenced by who has the say in designing those rules. That is, who has greater lobbying power in the political structure. A less democratic political and economic structure will distribute wealth less equitably than a more democratic one.

Finally, look at our current living experience. Ask yourself and others a question, “What, in your experience, gives you lasting happiness?” While there will be disagreement on whether money or private ownership of property gives true happiness, there will be wide agreement on certain responses. Forming and sustaining mutually warm and friendly relations with others makes each one of us happy. In addition, we also feel happier if we have greater freedom to express and exercise our choices at the levels of relations with other individuals as well as relations with macro structures like the state and market. To sum up, mutually satisfying and harmonious relations at the micro level with our friends and at the macro level with the political and economic governing structures will make us happy. The condition of 'mutuality' is crucial as it demands that we, in order to freely exercise choices, do not harm others. It's like saying that I will be happy in a relationship with a friend only if my friend is happy too. Extend this argument to larger society and it becomes obvious that we will be happier if all our co-citizens are happy too.

At the micro level of individual relations this demands that we become compassionate and sensitive towards others. At the macro level of relations with political and economic structures this demands that the structures are democratic, i.e. they provide enough space to every individual and community to express and exercise its concerns and choices irrespective of how underprivileged or privileged it is.

How can we become happy and satisfied individually?

Therefore the learning from our understanding of evolution of life, how economies work, and from our own living experience tells us that we are social beings. And that we will be happy and satisfied if we become more compassionate towards our people, other species and the rest of nature, and design political and economic governance structures that are more democratic.

Please note that money is just one of the means to achieve this end. Thus, our real challenge as economically privileged citizens is to influence the flow of money and materials in the economy so that our under-privileged co-citizens can gain as much access to resources and opportunities as we have. So that they too can lead a life of dignity.

If we work towards accumulating wealth mainly for our immediate family and organization, we will most likely ignore impact of our actions on the rest of the society and nature. In an inter-connected world, the result will be what we are witnessing already. Resources are being grabbed by the few corporations and individuals. Market is adding monetary value for the few and taking it away from the others. Most of privileged individuals are busy trying to make more money and accumulate more material assets for themselves.

Psychological disorders are increasing proportionately. Modernization is progressing at a fast pace. Big time corruption, not just in government but also in corporate world, is on the rise. At the same time tribals are being displaced from the forests in order to clear land for mining companies. Some tribals are, in turn, supporting Maoists in violent fight against the state's armed forces. Small farmers and families are being displaced without proper rehabilitation to clear lands and rivers for SEZs, big dams and industries. The urban poor are being thrown out in order to erect shopping malls, posh offices and residential complexes. Crimes in cities are on the rise. Local communities everywhere are protesting at the snatching away of public resources like land, water and forests on which their survival depends. They are protesting at the helplessness of not having the right to exercise choices that will help them come out of poverty and lead a life of dignity. Simultaneously, severe environmental problems, both local pollution of air, water and soil, and global problems like climate change and ozone layer depletion, threaten our wellbeing.

We would be foolish to not see the obvious correlations between these trends.

The problem needs to be solved at both the macro and the micro levels. At the macro level, structures of political and economic governance need to be made more democratic and humane. Take the example of GDP which we use as the dominant measure of economic prosperity of a nation. There are so many problems with this. One, it does not capture non-materialistic aspects of happiness, like living in harmonious relations with other people and the rest of nature. Two, GDP and its growth rate are only 'average' measures of economic wellbeing. They do not even reflect the overall economic status of the people living in a country. Every engineering and management school teaches that the performance of a population must be measured by both the average and the variation. Ignoring variation will give only partial and probably incorrect picture of a phenomenon. If we look at the frequency distribution of household income in India it will become clear that it is highly skewed, with the majority of people falling in the very low-income range and the minority occupying the long high-income tail. These two sets of population are growing at vastly different rates. The growth rate of income of the majority of poor people is less than even the rate of inflation, implying their condition is actually worsening. This is the set that consists of landless people, small farmers, tribals, dalits, street vendors, daily wage labourers and urban slum dwellers.

What is the implication for our professional choices and decisions?

As individuals living in an inter-connected web of nature, society and economy, what therefore can we do professionally so that we simultaneously attain happiness and satisfaction? This is the question I want each one of you to ask yourself.

Whatever choices you make in your profession, whatever actions you take, what work you do and how you earn your income, how you allocate your time, how you participate in your immediate surroundings and community and in the larger society and economy.. All these are the questions that you must seek answers to. Your analysis and response to these questions will determine how much happiness you will attain and how much meaning you will find in life.

I do hope that you will build harmonious relations with your friends, relatives, colleagues and strangers – relations that will be a source of happiness to you and to others. I also hope that you will show a lot of compassions towards your underprivileged co-citizens and strive to build more democratic structures of polity and economy.

I sincerely wish you all a very satisfying life ahead. May you become prosperous, contribute to others' prosperity, and in the process, derive lasting happiness – both socially and spiritually.

Rahul Pandey
(The author is the Editor of The Movement of India (bimonthly English magazine), a former faculty member of Indian Institute ofTechnology (IIT) Bombay and Indian Institute ofManagement (IIM) Lucknow, and is currently a founder member of a start up venture that develops mathematical models for planning and policy analysis. He can be contacted at [email protected])