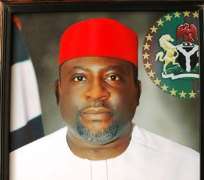 Imo Deputy Governor, Prince Eze Madumere has congratulated the President-Elect of the Federal Republic of Nigeria, General Mohammadu Buhari (RTD) over his landslide victory at the Presidential Polls, saying it was victory for democracy.

Prince Madumere, the Deputy Governorship candidate of All Progressives Congress made this statement at his official residence in Owerri, the capital territory of Imo State.

He however described Buhari's feat as victory for democracy. He further described him as a focused dogged fighter whose spirit of patriotism is unequaled.

He called on Nigerians irrespective of their different political leanings to embrace one another as Buhari's victory is for all Nigerians.

His words; it a story of a man who maintained a persistent focus despite all odds. He remained focused in his pursuit to contribute towards enthroning a progressive Nigeria.

Prince Madumere also showered encomium on his boss, the Governor of Imo State, Owelle Anayo Rochas Okorocha whom he described as a great leader with vision. He commended him for his vision and for joining hands with other Progressive leaders who worked assiduously to ensure that today's history came to pass.

He thanked the teaming APC supporters and general citizens for giving APC a chance.