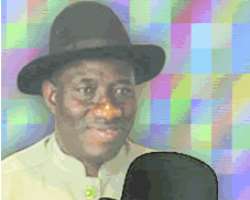 Goodluck and Sylva
Shortly after his elevation as running mate to then presidential candidate of the Peoples Democratic Party (PDP), Alhaji Umaru Yar' Adua in 2006, Acting President Goodluck Jonathan was mandated to submit the name of a candidate to replace him as the gubernatorial standard bearer of the party in Bayelsa State. Jonathan did not think twice before he put forward the name of Chief Francis Doupokogha.

Asked why he ignored Chief Timipre Sylva who was second at the primaries and picked Doupokogha, Jonathan had said if Sylva becomes the governor, sooner than later, he might not be able to come to the state again.

What informed this conclusion by Jonathan, close observers say, can be traced to the first term of former Governor Diepreye Alamieyeseigha where Jonathan served as his deputy, and Sylva was Special Adviser on politics to the governor. The duo were said not to have enjoyed the best of relationship as both have strong minds which is hard to change when a position had been taken.

Curiously, though from the same Bayelsa East senatorial zone which is populated by the minorities, with Jonathan coming from Ogbia and Sylva from Okpoama , their relationship have sunk to an all-time low since Jonathan went to Abuja as Vice-President.

Interestingly, the duo have employed subterfuge and display of maturity in public, insisting that there is no problem between them. But the body language of their loyalists have continually shown that things have fallen apart.

As Bayelsa gradually inches closer to the 2011 elections, the stakes are getting higher and neither of the two nor their loyalists are prepared to take any chances. What Bayelsans would witness in the ensuing weeks is an endgame that would make or mar several political careers.

Sylva's sins
Shortly after his inauguration as governor, Sylva's Special Adviser on politics, Dr. George Fente, in a news conference had disclosed that the Sylva government inherited a huge debt profile. Though he declined to mention under whose administration the debt was incurred, loyalists of Jonathan interpreted Fente's statement as hand of Esau, voice of Jacob and quickly pointed out that Fente's disclosure was aimed at humiliating Jonathan.

As the debt controversy was dying down, the House of Assembly populated by loyalists of Sylva began a systematic probe of certain contracts under Jonathan.

First, the House instituted a probe into the award of the contract for law books into Ministry of Justice library under Serikae Dickson, an ardent loyalist of Jonathan, who was his Attorney-General and Commissioner for Justice. Dickson immediately fought back, arguing that the probe was politically-motivated to embarrass him as a political associate of Jonathan and destroy his political career.

If the law books contract was indirectly targeted at Jonathan, the probe of the gas turbine awarded to Robo Micheal was believed by observers to further embarrass Jonathan. On the floor of the House, the Managing Director of the company and a close associate of Jonathan, Mrs.Aruba Egiriani, was literally grilled by the lawmakers.

The Speaker, Rt. Hon Werinipire Seibarugu, who described the contract issue as a 'mess' defended the House because of the story making rounds that the House was probing the Jonathan administration.

He said: 'Some of you, when you commit all these atrocities and are invited to appear before the House, you go to Abuja to say people are investigating and probing Vice-President Jonathan's administration. You can see clearly here that nobody is probing Jonathan, because we were part of the government. Everything done was in good faith. This House has seen that you cannot perform; you can go to Abuja and say we are probing Jonathan which is not true. All of us, the whole Bayelsa have seen that what is before us is a mess'.

Seibarugu's explanations that the House cannot probe Jonathan emphasised that it passed a vote of confidence on him in 2006, and even paid a visit to former President Obasanjo to drum support for Jonathan were regarded as political statement by loyalists of Jonathan to confuse the public.

That Jonathan felt the pressure of the gas turbine probe was evident when police officers from the Special Investigation Unit in the Office of the Inspector-General of Police in a letter from the Commissioner Of Police, Ali Amodu to the General Manager of Bayelsa Radio Corporation requested the release of five journalists in the station for interrogation for a case of criminal defamation.

However, the battle for offices of the state chapter of the Peoples Democratic Party (PDP) brought the cold war blowing into the open as loyalists of Sylva and Jonathan removed their hands from the gloves and confronted each other.

It was therefore, not a surprise that loyalists of Jonathan in the party suspended key actors in the Assembly and mobilised lawmakers sympathetic to them in the House, nudging them to impeach Seibarugu. The state was gripped by tension and the situation forced Jonathan to fly into Bayelsa the next day. At an expanded caucus meeting held in the Government House, it was decided that the status quo should remain as regards the party structure with Fred Agbedi as Chairman and Dr. Tarila Tebepah, secretary.

However, a few days later, Sylva and his loyalists based on a directive from the national secretariat sacked the state executive of the party and organized a fresh congress, bringing Sylva's men on board, thereby drawing the battle line.

Moves against Sylva
Few months after the inauguration of his loyalists as party executives, the Court of Appeal in Port Harcourt nullified Sylva's election and ordered a re-election. The Court of Appeal judgment elicited joy among Jonathan's loyalists as they saw it as an opportunity to get rid of Sylva. Shortly after the judgment, some lawmakers working in tandem with the Jonathan group moved to Port- Harcourt, Rivers State and announced the impeachment of Seibarugu, a known loyalist of Sylva who is to be inaugurated as Acting Governor.

Jonathan was in charge of affairs with Yar' Adua out of the country, and pressure was mounted on him not to allow the inauguration of Seibarugu. It took the efforts of Sylva to get in touch with Yar' Adua in Germany before the Chief Justice of the Federation directed Bayelsa State Chief Judge to inaugurate Seibarugu.

After that plot failed, subtle moves were made by loyalists of Jonathan to penetrate Seibarugu to convince him to ditch Sylva so that the party can pick another candidate. But with their inability to woo the Speaker, they stepped up a strident campaign against Sylva sponsoring various publications that he can no longer be the party candidate in the state.

Sylva was said to have been taken aback when he realized that most of those attacking him were Jonathan's loyalists and wondered why the latter could not call them to order. The campaign which almost rendered Sylva's candidacy unmarketable for the re-run election prompted him to look in the direction of Yara' Adu and the party's hierarchy which re-affirmed his candidacy and forced those opposing him to eat the humble pie by rallying round him for victory at the polls. But since his re-election, the opposition rather than abating, has increased with loyalists of Jonathan attacking major policies of his government.

Loyalists as alibi
However, in spite of the obvious cold war between their loyalists, Jonathan and Sylva have continued to insist that there is no disagreement between them. Since 2008 when Sylva won the re-run election, he and Jonathan have engaged each other in shadow boxing.

Sylva, in an attempt to down-play the feud between them at a time distanced himself from a publication from a group called 'Concerned Bayelsans for Good Governance' which petitioned Jonathan to Yar' Adua.

At another time, he warned his aides and members of the state Executive Council to watch their utterances, warning that anybody that portrays Jonathan in bad light would be sacked. The erstwhile Commissioner for Information, Chief Asara, disclosed what Sylva told the cabinet.

'The Governor has cause again to inform the executive that he and the Vice-President have no problems whatsoever. And he went on to warn members of executive that henceforth, any member of the executive that either in public or private utterances mention the name of the VP would be punished. Because, according to him he cannot have a leader at the level of the Vice-President of the Federal Republic of Nigeria and Bayelsans would be the very people that would want to ridicule him. It that means we are not grateful to God for that position.

There are so many Nigerians looking for that position. Instead of Bayelsans to stand behind him there are speculations all over the place that he is having problem with him. The governor also told us that even by age, the VP is older than him and by position he is just a governor of a state while the VP is that of Nigeria.'

A group known as Movement for Good Governance led by Dr. George Fente, had expressed worry over claims of division between Jonathan and Sylva.

According to him, political jobbers and sycophants are hell bent on ensuring that there is division between the duo so that they can benefit from it. Fente said : 'We want to dismiss the speculations of rancour between the state governor and the Acting President. The two political leaders are political bed fellows that the current political development cannot not separate. We also warn those known to be political sycophants and job seekers from fanning the ember of disunity among the duo.'

'Rather than looking for loopholes to fault both the Acting President and the State Governor, the politicians in the state should take steps in bridging any existing gap between them. We also want to fault the modus operandi of some political groups claiming to be working for the interest of the Governor or the Acting President to desist from diversionary actions capable of fueling the political situation in the state'

Implication of feud
Though Jonathan has not uttered a word since the speculations that there was a cold war between him and Sylva, but his body language is enough to indicate that he is not comfortable with Sylva.

Sources said Sylva's closeness to Yar' Adua had made him by- pass the office of the Vice-President many times to deal directly with the President. It was therefore, not surprising that his name was linked with those alleged to working to undermine Jonathan when Yar' Adua was absent from the country.

If the situation continues like this with the duo unable to iron out their political differences, the interest of Bayelsa State would be the first casualty.

It is no secret that Governor Sylva did not speak in public to support the emergence of Jonathan as Acting President, it is also public knowledge that there is a grand plan coordinated by Jonathan's loyalists to ensure Sylva does not get a second term ticket. As the politics for the next round of elections begins, tension is gradually building up in Bayelsa that only Bayelsa elders with impeccable character can douse. But would they? Only time can tell.