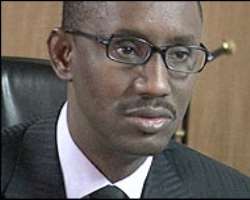 There are strong indications that the self-exiled, embattled former Chairman of the Economic and Financial Crimes Commission, EFCC, Mallam Nuhu Ribadu may soon return to the Country, following the withdrawal of the charges preferred against him by the Federal government.

Just last week, the Nigerian government asked for charges to be dropped against the former head of its anti-graft body who is on trial for failing to declare his assets while in office.

Confirming the Federal government's withdrawal decision last week, Counsel to the ex-Anti Corruption Czar said: "The federal government filed the application to discontinue the trial of Nuhu Ribadu before the code of conduct bureau. The application will be approved on April 8,"Falanatoldnewsmen.

He was removed as head in very controversial circumstances in December 2007 and accused of not declaring his assets while in office in compliance with the 1999 constitution.

Anti-graft campaigners say that Ribadu fell foul of powerful former state governors by trying to bring them to justice over embezzlement charges, arguing that the anti-corruption war has lost steam since his removal.

Transparency International still ranks Nigeria as one of most corrupt countries in the world.

Niger Delta Standard investigations revealed that Mallam Nuhu Ribadu, who is on self-exile in the United States of America, will return to play a role in Acting President Jonathan's government.

Further investigations by our correspondent revealed on that Ribadu, who was let off the hook by the Code of Conduct Tribunal last Wednesday, following the Federal Government's withdrawal of the non-declaration of asset charge pending against him before the CCT, was being considered to be Jonathan's Special Adviser on Anti-Corruption.

This is contrary to earlier widespread rumour in the Presidency that Ribadu was being considered for a ministerial position.

It was gathered that the Acting President may have made up his mind to appoint Ribadu into the position to oversee the anti-corruption agencies, including the Independent Corrupt Practices and other Related Offences Commission.

Jonathan had promised in a speech broadcast live on radio and television after the National Assembly passed resolutions on February 9 empowering him as the Acting President that renewal of the anti-corruption war would top his agenda.

It was, however, gathered that the decision to make Ribadu, a long time ally of Jonathan, the leader of the anti-corruption campaign is causing serious panic in the EFCC.

If Ribadu assumes office as the Special Adviser on Anti-Corruption, he would be strategically positioned to exercise control over the EFCC and ICPC. By this, chairmen of the EFCC, Mrs. Farida Waziri; and the ICPC, Justice Emmanuel Ayoola (rtd); would be taking instructions from his office.

”This would signify a highly probable change of guard in the EFCC,” a source told our correspondent over the weekend.

The Federal Government last Wednesday, withdrew the single charge against Ribadu pending at the CCT, thus confirming weeks of strong speculations that the period of ostracizing and hounding the former EFCC boss was nearing an end.

The Special Assistant to the immediate past Attorney General and Minister of Justice on Litigation, Dr. J.O. Olatoke, entered a Nolle Prosequi for the suit on behalf of the FG.

Ribadu was demoted from the rank of Assistant Inspector General of Police on August 5, 2008 to Deputy Commissioner of Police, with the Police Service Commission saying that his earlier promotion did not follow due process as it was not approved by the PSC.

On December 23, 2008, the former EFCC boss was finally dismissed from the Nigeria Police Force.

All attempts to contact the ex EFCC boss proved abortive, as his line could not be reached.

However, a close confidant of Ribadu, who spoke on the ground of anonymity sounded happy with the decision of the FG to withdraw the case against him.

He, however, declined comments on the speculation that Acting President Jonathan was considering him for appointment, saying that he had not been informed by the Presidency.

”I can tell you that Ribadu has not been informed. I don't know anything about it. The Presidency has not informed him about such a position,” .

Asked about his possible return date now that the FG has withdrawn the charge against him, the source said, ”I don't want to talk about when he is coming back home. He wants to be quiet about it.”

However, another authoritative source close to him said it was most likely that Ribadu would be appointed to supervise the anti-corruption agencies.

The source dismissed claims that Ribadu planned to return to Nigeria last weekend, stressing that he had a few things to tidy up before returning home. The source further added that Ribadu would not return to the country before next Thursday when the case against him at the CCT would be finally ended.

”Haba! Sunday is too early. Even the matter at the Code of Conduct Tribunal will be coming up for hearing next Thursday. He won't be here until the case is resolved. He has a few things to tidy up,” the source added.

Spokesman of the EFCC, Mr. Femi Babafemi, however, said there was no panic in the anti-graft agency over Ribadu's imminent return. “I am not aware of any panic. There is no panic whatsoever. Anything to the contrary is a baseless hype,” he said

Anchored on the fore going, it is obvious that the whole brouhaha about the ex- anti corruption Czar's non declaration of assets is Political.

While one commends the efforts of the acting President to allow an innocent man who fought against corruption with his life in this Country to enjoy freedom, it is expedient that our leaders stop deceiving us.

The maltreatment meted on Ribadu is enough to discourage people from doing their best to ensure a better Nigeria.

Again, it is important for the Federal government to arrest and prosecute all those who made themselves willing tools to be used in not only hounding this innocent man, but misinforming and misleading Nigerians, making them see Ribadu as evil.

Only when this is done that Nigerians will be satisfied with the matter and serve as a deterrent to others.

Final, efforts must be intensified in the anti graft war, to ensure that the Country's image is redeemed and the Country moves forward.