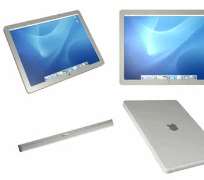 Apple's latest product, the iPad tablet computer, has gone on sale in America.

The first generation model has wi-fi but not 3G connectivity, and unlike other tablet devices, it is not yet available outside the US.

Queues for the new iPad were considerably smaller than the crowds which gathered for the launch of the iPhone in 2007, according to reports.

However people had travelled to the US from around the world to purchase a device.

'Huge hit for some'

Apple took pre-orders online but some early adopters began queuing outside stores the day before its release.

The company's co-founder Steve Wozniak joined a queue outside an Apple store in California on Friday evening.

“It's going to be a huge hit among a very small section of the public – Mac lovers and early adopters,” said the BBC's technology correspondent Rory Cellan-Jones.

“The bigger question is whether there is that big a market between the smartphone and the laptop for it to fill,” he said.

“Newspapers and magazines are certainly hoping so but the jury's still out.”

In Palo Alto, California, tech expert and former Microsoft “technology evangelist” Robert Scoble, who spent the night outside a store with Chatroulette creator Andrey Ternovskiy, said there were only around 30 in the queue.

Greg Packer and Cheline Lundin are reported to have been the first in line in New York and Chicago respectively. Mr Packer began his wait outside Manhattan's Fifth Avenue Apple store on 30 March.

The device appealed to him because it is “like a mini laptop,” he said in a YouTube clip.

AFP reported 15 people waiting outside the Apple store in New York on Friday afternoon, including a mother, daughter and grandmother.

Mother Jeanney Mullen said she was planning to buy one for herself and her 11 -year-old daughter Giovanna.

Her own mother had come along to buy a third for Ms Mullen's boss, as store customers were limited to two devices each.

Mixed reviews
iPad or iFad? Apple set for launch
However not everybody shares their enthusiasm.
Journalist and sci-fi author Cory Doctorow has attacked the iPad for being too locked-down.

“Buying an iPad for your kids isn't a means of jump-starting the realisation that the world is yours to take apart and reassemble; it's a way of telling your offspring that even changing the batteries is something you have to leave to the professionals,” he wrote on website Boing Boing.

While Apple has pitched the iPad as a “third” device between a phone and a PC, the tablet does not synchronise easily with the two according to Ian Fogg, an expert analyst at Forrester.

“Apple has left too much in the hands of consumers to transfer and manage manually,” he wrote in a blog post.