Soludo Goes To The Supreme Court 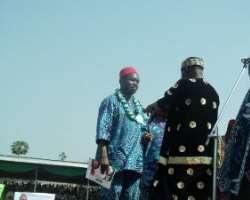 Soludo Campaign Organisation wishes to declare that it respectfully disagrees with the ruling of the Appeal Court today which reaffirmed its earlier instructions to INEC not to recognise the candidacy of Prof Chukwuma Soludo/ Emma Anosike. PDP must have its candidates for February 2010. The sustained delaying of the judicial resolution of this matter for the PDP certainly gives unfair advantage to the other 24 political parties whose campaign activities are unimpeded.

We know that most of the people who are orchestrating, funding, and sponsoring these impediments and challenges as well as using all means of threats, coercion and intimidation are the same people who were responsible for burning Anambra state and bombing state agencies; they are the same people who plotted the kidnapping of a sitting state governor; they are the same people who conspired to loot the treasury of Anambra state; and now they battle the new PDP after joining smaller breakaway political parties; and they have resorted to any trick in the book to see if they can stop the people of Anambra state from having a credible election. These mafia groups believe that they can stop Soludo/Anosike whom are the front runners to win this election and all other smaller rival parties appear to join them in this conspiracy. We say NO to intimidation and harassment. Every political party feels that if they can sponsor all kinds of obstacles and challenges to stop the PDP candidates from emerging, then they can improve their own chances of victory.

PDP is the biggest party with the largest following in Anambra state. We also know the fact that most of the 25 political parties registered to contest the 2010 elections in Anambra state are comprised of smaller breakaway factional groups of the PDP. Therefore, Soludo's development agenda for the people of Anambra is unrivalled and designed to achieve the greatest public good.

Soludo has the clarity of vision and intellectual resources; the executive capacity to deliver prosperity for all Anambrarians and a vastly unrivalled network of contacts locally and internationally to attract the greatest amounts of capital to harness our people's talent for transformational change. Anambra state and Ndi Igbo have suffered enough from the scourge of joblessness, kidnapping, insecurity, de-industrialisation, mass migration outside of the state and lack of visionary leadership which has underdeveloped Anambra state. The New PDP would restore hope and wipe away the tears of frustration from our people.

We call on members and supporters of PDP to remain calm and law abiding. PDP mobilisation must remain be sustained and intense. All persons who desire to return to the new PDP should continue do so now without hesitation because the New PDP offers the greatest opportunity for the advancement of Anambra peoples' welfare and interest.

Now is also good time to sustain reconciliation to aggrieved party members. This is the time for peace. PDP is a big umbrella with room for everyone and given the electoral mandate in February 2010; we know that the task of transforming Anambra state would create huge lifetime opportunity for everyone to contribute in service to the people by deploying their own individual talents towards achieving a greater collective good.