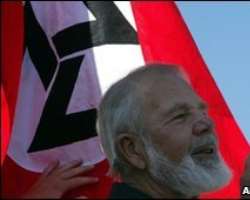 South African President Jacob Zuma has appealed for calm after the killing of the white supremacist leader, Eugene Terreblanche.

Mr Zuma said South Africans must not allow anyone to take advantage of the “terrible deed” by inciting racial hatred.

Police said Mr Terreblanche had been beaten to death in a dispute with two farm workers over unpaid wages.

Mr Terreblanche's far-right movement urged its members to be calm.

The 69-year-old was attacked on Saturday evening at home on his farm near the town of Ventersdorp, North West province.

'Must be condemned'
Two males, aged 21 and 15, have been arrested and charged with his murder, said police.

His body was found with facial and head injuries on a bed, after he was apparently attacked with a machete and a wooden club.

Mr Terreblanche came to prominence in the early 1980s, campaigning for a separate white homeland and championing a tiny minority determined to preserve apartheid.

Mr Zuma's office said in a statement: “The president appeals for calm… and asks South Africans not to allow agent provocateurs to take advantage of this situation by inciting or fuelling racial hatred.

“The murder of Terreblanche must be condemned, irrespective of how his killers think they may have been justified. They had no right to take his life.”

The BBC's Karen Allen in Johannesburg says the murder comes amid growing anxiety about crime in South Africa.

Opposition politicians linked the death to racially inflammatory sentiments from a minority of the ruling ANC party.

“We call on all South Africans across whatever divide – across the racial divide, across the political divide – to desist from making any inflammatory statements which are not going to help anyway on the case we are dealing with,” he said.

Meanwhile, relatives and friends of Mr Terreblanche gathered near his home to pay their respects.

AWB spokesman Andre Visagie said: “We will decide upon the action we are going to take to avenge Mr Terreblanche's death,” adding that next steps would await a party meeting in May.

He earlier blamed the killing on the recent singing of an apartheid-era song by a firebrand ANC leader.

Boer is Afrikaans for a farmer, but also a derogatory term for any white in South Africa.

A spokeswoman for the opposition Democratic Alliance party, Juanita Terblanche, no relation, said: “[Mr Terreblanche's killing] happened in a province where racial tension in the rural farming community is increasingly being fuelled by irresponsible racist utterances.”

The minority party Freedom Front Plus called on people to refrain from reacting emotionally.

“The murder creates an explosive situation and is condemned in the strongest possible terms,” party spokesman Pieter Groenewald said.

More than 3,000 white farmers are estimated to have been murdered since the end of apartheid in 1994.

A committee of inquiry found in 2003 only 2% of farm attacks had a political or racial motive, although critics said this figure was far too low.

Mr Terreblanche had founded the white supremacist AWB in 1973, to oppose what he regarded as the liberal policies of the then-South African government.

His party tried terrorist tactics and threatened civil war in the run-up to South Africa's first democratic elections, before sliding into relative obscurity.

Mr Terreblanche served three years in jail after being convicted in 2001 of the attempted murder of a farm worker.