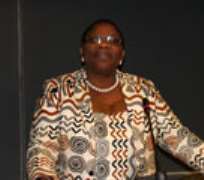 NEW YORK, April 1, 2010 As seventeen of Africas 53 nations celebrate 50 years of independence in 2010, Africas golden moment has come and investors around the globe must look to the continent often painted only as risk-prone if they are to capitalize on business opportunities.

This, according to World Bank Vice President for the Africa Region Obiageli Ezekwesili, who spoke to investors, business executives, members of the African Diaspora and students attending the seventh edition of the Columbia University African Economic Forum in New York.

With US$60 billion in investments, the revolution now visible to all in Africas information and communications technology (ICT) sector for example is only a signpost of what is possible in other sectors still virgin in Africa, the vice president said.

ICTs, only one of many opportunities
Predicting that Africas development will follow a totally different paradigm from that of other regions on account of the technology factor, Ezekwesili said the ICT sector is only one example of Africas many opportunities of cashing in on transformative growth.

Thanks to mobile telephony, even where land lines were once non-existent or a luxury for the rich few, cell phones are now aplenty. Cell phones have, in fact, become one of the important assets for poor farmers in Kenya and fishermen in Sierra Leone, helping them to gain access to market information, bargain hard for their products, boost their incomes and take advantage of opportunities that would otherwise have past them by.

The emergence of a knowledge economydriven by innovation, ideas, education and technologyonce thought remote for Africa, now appears to be unfolding before the ink has dried on gloomy forecasts by Afro-pessimists.

All of a sudden, stereotypeseven those once true about Africaseem increasingly removed from fact. Publishers are bombarded increasingly with books that speak of Africa as a rising development star; of Africa becoming the new Asia; of Africa as the crucible of future global markets and wealth. National Geographic Magazine could not have been more accurate when it headlined in September 2005: Africa  Whatever You Thought, Think Again.

If the global financial crisis proved one thing, it is that the riskiest markets and business ventures are not necessarily only in Africa, Ezekwesili told investors. The continent also offers splendid profit-making opportunities, she added, suggesting that investors who could but failed to get in on the ICT sector before the current boom must now be gnashing their teeth.

The ICT sector in Africa has proven that effective basic service delivery to the poor can be the basis for profit. Africa, she stressed, offers some of the highest rates of return on investments.

As Africa rebounds from the global economic crisis with growth forecasted at between 4.4 and 5.2 percent in 2010, opportunities in larger economies seem to be slowing down. It is a good thing. Now we can get you home, Ezekwesili told members of the African Diaspora in attendance.

She encouraged the Diaspora to think creatively about how to use some of the US$20 billion they wire home every year in remittances to help create jobs on a continent where growth has been without jobs.

Investing in Jobs
Unemployment rose 10 percent in Africa last year. An estimated seven to 10 million youth are added each year to an already long line of 200 million jobless African youngsters. A time bomb for a continent where social upheaval remains a real danger if millions of unemployed youth find it more rewarding to turn to crime or armed rebellion to earn their livelihoods.

Everything must be done to avoid what Ezekwesili described as the creative dissatisfaction of citizensgun in handasking their governments what have you done for us of late.

Investments in five key areas could help, she explained. Africa must do more to expand income-generating opportunities in agriculture; to improve education, skills training and the empowerment of women and girls; to improve infrastructure; to expand access to credit; and to boost intra-African trade and regional integration.

Already under-funded, agriculture which is the source of livelihoods for more than 60 percent of Africans, notably girls and women, needs significant injections of capital to modernize, expand productivity, create jobs, and stem the threat it faces from weather vulnerability, which in some crops slashes yield by 50 percent.

Although Africa already competes favorably with China and India at factory floor level, it continues to miss out on the two percent increase in GDP growth and the 40 percent increase in productivity that would have accrued had it adequate infrastructure. Building skills and providing the kind of education that frees the creative genius of Africans would accelerate the shift of the continent to a knowledge economy.

Interest rates averaging eight percent across the continentwith some countries charging an exorbitant 25 percentmake investments an awfully expensive enterprise, especially for indigenous African entrepreneurs, reliant on local banks for funding. They indirectly offer a major advantage to investors coming from other regions, where the cost of interest is more in line with the global average of 4.8 percent. Additional investment and reforms are needed to help lower interest rates.

Most of Africas 18 land-locked countries are heavily reliant on successful regional solutions, including intra-African trade, to boost growth.

Africas Energy Deficit
Resolving Africas energy deficit must also remain a top priority, Ezekwesili stressed, pointing out that only one in four Africans has access to energy. The averages are low: five in every 100 Liberians, and six in every 100 Ugandans. While South Africa is generally better off, its energy crisis is no less dramatic.

South Africa, which was already experiencing rolling black-outs as its economy overheated, was in fact saved by the global economic crisis, Ezekwesili said, explaining that had growth continued uninterrupted, that countrys power supply would have never held up.

The World Bank is proud, she said, to be working with the South African government to resolve the problem through an upcoming loan to the countrys power utility, Eskom. We will continue to do this in a responsible manner, combining renewable energy as the technology becomes increasingly available, affordable and tested.

With six Southern African countries entirely dependent on South Africa for their energy supply and with every one percentage growth in South Africa having an external effect of 0.5 percent on the continent, it is not only a South African problem that the Eskom project resolves, but a major problem for all of Africa.