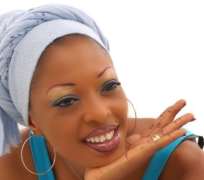 Shade Omoniyi, popularly known as Lepa Shandy, has stepped up her act in the Yoruba movie industry. With several years of experience in acting business, she is fast becoming one of the most appreciated chics in the film industry.

With the status of a celeb, the babe gets invited to many social events in and outside Lagos. It didn't come as a surprise, therefore, that she was one of the guests at the City People Magazine awards held in Lagos recently.

The organisers of the event had expected very big and important personalities, as the down section of the hall was reserved for the VIPs while other guests were meant to watch and catch the fun of the show from the upper part of the hall.

But some stars felt they were very important people and as such should have a place at the reserved section meant for important personalities. Lepa Shandy was one of them.

She must have thought that her popular face would earn her a seat in the reserve section, but one of the mean looking guards 'bounced' her, not caring who she was.

Did Lepa Shandy gather her wits and move up to the popular stand where she was originally meant to be? No. Seeing that the mean looking guards were not ready to allow her in, she resorted to begging. She pleaded with them to allow her entry to the reserved side but the 'bouncers' would not have any such thing. Even when one of the organisers came to plead on her behalf, the 'bouncers' they insisted she should go to her original seat.