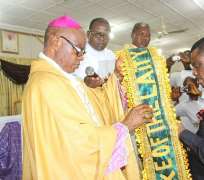 Barely ten days to the commemoration of his first year in office, the governor of Anambra State, Chief Willie Obiano and his wife, Ebelechukwu have bagged some of the highest honours to be conferred on anyone by the Onitsha Arch-Diocesan chapter of the Catholic Laity Council of Nigeria (CLCN.

The high-performing governor and his wife were conferred the rare titles of Duke and Duchess in a solemn ceremony at the Shanahan Hall Onitsha that also marked the fortieth Anniversary of the Catholic Laity Council.

Speaking during the Holy Mass held to commemorate the occasion, the Archbishop of Onitsha Archdiocese, His Grace, the Most Rev. Valerian Okeke announced that the titles of Duke and Duchess were conferred on Governor Obiano and his wife in recognition of their immense services to the church and the Laity in many parishes where they have resided across the country, especially Lagos.

According to him, the Obianos had demonstrated exemplary commitment to the church over the years, identifying with various causes that make their honour richly deserved.

Archbishop Okeke urged all Catholic faithful to emulate the zestful commitment of the Obianos to the church which they had demonstrated for years before he became the governor, and seek more impactful ways to lend a hand to the collective quest to solve the many challenges that beset the society.

Going down the memory lane, Archbishop Okeke explained that the Catholic Church came to Onitsha 130 years ago (1885) but that it wasn't until 40 years ago that the Laity Council was formed to ensure a greater organization and cohesion in the church.

According to him, the Laity constitutes about 99% of the entire structure of the church while the Priests who handle the leadership is just about 1% of the population of the church.

Accepting the honour bestowed on him, Governor Obiano assured the congregation that the gesture would spur him and his wife to do more in the service of God.

Governor Obiano who described the honour as a very important one, thanked the Catholic Laity Council of Nigeria for considering he and his wife worthy of such honour. “This is a very important honour. This is the first time they are conferring this title on anyone since the council came into existence 40 years age. So, you can see how important it is. We are not taking it lightly. It will spur us to do even more” he assured.