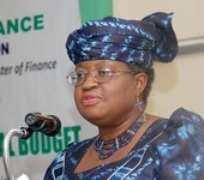 The Federal Government on Thursday said it had blocked loopholes in the old pension administration scheme, where over 15,000 ghost pensioners were included in government payroll system.

The Minister of Finance and Coordinating Minister for the Economy, Dr. Ngozi Okonjo-Iweala, said this at a forum for stakeholders organised by the Pension Transitional Arrangement Directorate, where pensioners and other stakeholders in the pension system gathered to interact.

According to her, the Federal Government has been able to save N2.1bn annually in less than two years after the establishment of PTAD.

At the event, the Director-General of PTAD, Ms. Nellie Mayshak, said the major success of the agency was checking dubious financial transactions in commercial banks, which pensioners' funds were hitherto channelled for personal gains.

Mayshak said PTAD, through its establishment, has taken advantage of the ICT to consolidate on the erstwhile pension offices, comprising Civil Service, Pension, Police Pension, Customs, Immigration and Prisons pension/pension boards of trustees of all parastatals funded by the Federal Government.

Okonjo-Iweala said 14 individuals, whose identity she kept secret, were currently standing trial in the law court over the pensions probe initially carried out by the National Assembly in 2013, in which N32bn was allegedly squandered.

While receiving commendations for bringing sanity into the pension scheme, Okonjo-Iweala said through the Government Integrated Financial Management Information Systems, PTAD had been able to consolidate several accounts in commercial banks, holding pension funds, that had been prone to looting to three or four.

To further boost transparency and accountability in the pensions system, the minister said a nationwide verification process and biometric data capture for all pensioners had commenced with Police Pensioners from the North and South-West completed.

'These interventions have led to concrete, real life improvements in the lives of our pensioners. For example, the Civil Service Pension, which has the bulk of pensioners managed by PTAD, has seen the removal of over 15,000 duplicated or ghost pensioners from its payroll, leading to savings of about N2.1bn annually,' she stated.

But representatives of the Nigeria Union of Pensioners, who were also at the forum, urged government to offset about 42 months pension arrears, including the 33 per cent pension increase.