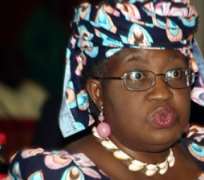 The nation's foreign exchange reserves tumbled by $2.68bn in less than two months to $31.79bn as of February 23, data obtained from the Central Bank of Nigeria on Wednesday showed.

The current stock of external reserves revealed a drop of about eight per cent from the balance of $34.47bn recorded on December 31, 2014.

Meanwhile, the naira crashed further on Wednesday as it closed at 201.84 against the United States' dollar at the interbank market, where all demand for forex are now being channelled. The currency had closed at 200.80 on Tuesday.

The CBN had last week closed the Retail and Wholesale Dutch Auction System foreign exchange window as part of efforts to preserve the country's depleting forex reserves and avert the emergence of multiple exchange rate regime.