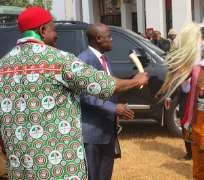 The Initiative for Change Organization (ICO), a civil society and democracy watch group has alerted the general public of a highly organized and well-funded campaign being sponsored against the person of the governor of Anambra State, Chief Willie Obiano, by some disgruntled politicians in the Anambra State chapter of the PDP.

In a Press Statement issued at the weekend the group claimed that it had uncovered a massive smear campaign worth N100m sponsored by some PDP elements in the state to discredit all the great achievements of Governor Willie Obiano and incite the Presidency against him.

The statement which was signed by the President of the Group, Dr. Jideofor Igboamaka, maintains that the campaign which is being handled by a Lagos-based communications agency was intended to portray Governor Obiano as working against the re-election of President Goodluck Ebele Jonathan.

“After closely monitoring the activities of this group, we now have some incontrovertible evidence of the publicity materials they want to publish in some leading newspapers in order to incite the Presidency against the governor of Anambra State,” the statement said, further pointing out that the calumny campaigners have leveled many spurious charges against Governor Obiano.

According to the statement, “Our media monitoring wing has intercepted some of their campaign materials. We are dismayed that all the charges they are leveling against Governor Obiano are not only outlandish and incredulous but offer a deep insight on how low these people are willing to descend in order to discredit Governor Obiano

The Initiative for Change Organization (ICO) also pooh-poohed the charge that Governor Obiano was supporting Dr. Chris Ngige's senatorial campaign describing it as “illusionary and diversionary,” pointing out that the governor's forthrightness on political matters was common knowledge.

“With Governor Obiano, you know where you stand on any issue at any time. We have monitored his performance in the past one year and we can assure Nigerians that Governor Obiano never says what he does not mean. So, the group's claim that he is secretly supporting Dr. Chris Ngige is both illusionary and diversionary. It is a poorly thought out campaign that has failed woefully even before it takes off,” the statement argued.

Linking the impending campaign with part of the efforts by the opposition to distract the governor from his good works in the state, the Initiative for Change Organization however warned that it would not hesitate to blow the whistle on any group or individual who has taken up the challenge of inciting the Presidency against the governor of Anambra State.

“We are appalled that some desperate politicians, who have no sense of limits, have taken it upon themselves to instigate the Presidency against the governor of Anambra State. We shall not relent in our efforts to expose their efforts and alert the general public on their shenanigans. For now, we are constrained by the dictates of decency to react in a measured tone to this dastardly act in the hope that the faceless group behind this campaign will desist from their plot. However, we may feel sufficiently justified to name names in subsequent reactions if the calumny campaigners do not discontinue with their plot,” the group warned.