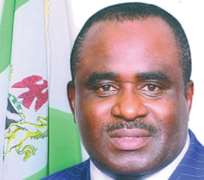 The Federal government and the government of Cuba have entered into partnership using biotechnology to eradicate malaria in the country.

This was disclosed yesterday in Abuja when the Cuban Ambasssador, Carlose Trejo Sosa, paid a courtesy visit to the Director General, National Agency for Food and Drug Administration and Control (NAFDAC), Dr Paul orhii

The Cuban government has also invited a delegation from NAFDAC that will be led by Director General to pay a visit to Cuba in order to cement the relationship in various aspects of medicines.

Responding to questions from journalists, the Cuban Ambassador said: 'Because NAFDAC is one of the important agencies in Nigeria which cares for  the wellbeing for the Nigerian population. Any type of medicine that will be used in this country have to be approved by NAFDAC.

'Cuba, being a country that is rich in biotechnology which could be use also for the Nigerian population, of course, we have to come through NAFDAC where we have people that are capable with experience and expertise who will look at the technology and see whether it is good for Nigeria or not.

'Of course, we want to invite formally a delegation led by the Director General of NAFDAC to go to Cuba to see in which areas we could be engage in collaboration. I think and I am sure Nigeria has many things to offer to Cuba in the aspect of experience and investigation which have been made in this country which could be of greatest interest to Cuba people.

On his part, the DG NAFDAC, Paul Orhii said: 'Cuba has a very rich cultural heritage and has  good ties with Nigeria. But more importantly from a health perspective, Cuba is the global leader in biotechnology, developing new technologies to fight diseases and most of their technologies they are bringing to fight diseases are more natural  because they attack the disease in a more natural way.

'For example, the biolaphisal programme on malaria that we are talking about is not just spreading chemicals that will broadly kill every other thing that will come on its way, they specifically target some disease causing larvae, all sorts of malaria, black flies that cause River Blindness.

'As a leader in biotechnology in the whole world, I think we have a lot to gain and to learn in this relationship.

'Even on eliminating malaria alone, you cannot put a naira sign. We are talking about eradicating malaria in Nigeria. We know that anti malaria are the most often used in high volumes in Nigeria because most people in Nigeria suffer from malaria.

'Whatever cost it is, it is minimal compared to what we are going to achieve in this project.