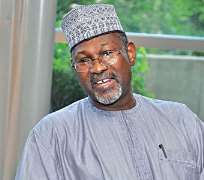 The Chairman of the Independent National Electoral Commission (INEC), Prof Attahiru Jega, on Wednesday, reiterated his preparedness to conduct the general elections as scheduled but maintained that only the military could guarantee the sanctity of the March 28 and April 11 dates.

Jega, who appeared before the Senate to explain the level of INEC's preparedness for the elections, however, stunned many of the lawmakers when he revealed that one million Permanent Voter Cards had yet to be received by the commission from the manufacturers.

The Senators had thoroughly grilled him after he made about three-hour presentation and demonstrated how the card readers work.

Responding to a question by the Minority Leader, Senator George Akume, to give a clear assurance on the dates, Jega replied, 'I think it is a very difficult question to answer.

'On what is not under our control, it is futile, it is fruitless and useless to give a definite guarantee on them. I think that question should be directed appropriately. The questions of security, I will leave it, I don't think I am competent to answer it sufficiently.'

Asked how he would respond if the security agencies requested a further delay, Jega said doing so would be illegal.

He then made reference to a constitutional provision that requires elections to be concluded at least 30 days before May 29, when a new government must be sworn in.

'Every Nigerian knows we want elections to hold… within a constitutional time frame.   The security agencies are (made up of) patriotic Nigerians. Let's give them the benefit of the doubt,' he told the senators.

He added, 'We should be fair also to the military. Soldiers are also patriotic Nigerians.   I don't see how anybody will contemplate any extension beyond these six weeks.

'There is no constitutional grounds upon which you can do that. For us, we work by the constitution, by the law . That is what is guiding us and we should all put the interest of the nation at heart.

'The human factor is always significant, it is always important but we believe that working together with security and other stakeholders, we should be able to prevent negative human intervention that can create problems.

'I kept saying consistently that INEC is not a security organisation. We are an election management body; so we rely a lot on security to be able to ensure that things are done well and that there is no disruption of the electoral process.

'We have been working very closely with the inter agencies consultative committee on election security and that is why for us, if the service chiefs say that we can't guarantee security, give us more time, what is the alternative security arrangements ?

'If we consulted with the stakeholders and we cannot find an answer, what happens? We are going to use close to 700, 000 ad hoc staff. We can't send people to the field in that kind of a situation.

'Our prayer is that in the next six weeks, there will be significant improvement in the security situation for us to hold the   elections all over this country in a very secure environment.

The INEC boss expressed confidence in the effectiveness of the card readers, stressing that their use for accreditation during the elections would not contravene any provision either in the electoral act or in the constitution.

He also said that   anyone who clones and tries to prevent the use of the card readers would be treated as a criminal.

'We have done some few tests and the result we have is about 90 per cent successful. We feel comfortable that the card readers can be used. They will add value to the electoral process.

'It cannot be 100 per cent perfect. It may not be able to read every finger and that is why we agree with political parties. We bought 182, 000 card readers. Some of them did not work.

'Of the total number of card readers that we ordered and configured, only 503 had failed to work. That is 0.03 per cent of the total. The agreement is that if a card reader fails during accreditation, then, we will try and repair it within the time of accreditation which is between 8am and 1pm.

'If a card reader fails around 10am , before 1pm, we will do everything possible to replace it but if we are unable to do so, the time lost will be added to the accreditation period and extended.'

On   the high rate of PVC collection in three states under emergency rule in the North-East, Jega wondered why Nigerians were heaping the blame on INEC.

He said, 'Why should anyone blame INEC for that? There is a need for us to have clarity on this matter. In Yobe State, only two local government areas are under emergency rule and the state is among the second phase in the distribution of the PVCs.

'In the   state and about 11 others, we distributed cards as far back as July 2014. So if the rate of collection is very high, I don't see why that should be seen as a problem. In Adamawa State, only four LGAs are inaccessible and we deviced   a system where PVCs were distributed to Internally Displaced Persons.

'So, as many as had been displaced but who had registered have been able to collect their cards. But when you look at the way newspapers do their analysis, they tend to project it as if there is regional slant in the distribution of the cards.

'It will be wrong to assume that Yobe State or any other state has higher rate of collection. If people come out to collect and others   did not , why should INEC be blamed for that.

Jega, who said there was no case in court   that was capable of preventing INEC from holding the elections as scheduled, added, ''As I speak to you, 800,000 to one million cards are yet to be produced.''

He however gave assurance that the PVCs would be produced and delivered to their owners before the days of the elections.

The INEC boss described the purchase of PVCs by some people, especially politicians,   as a criminal offence.

He said, 'If we have information on criminal purchase or cloning of the cards, we will invite the security to investigate. People can clone our cards but if they are not issued by INEC, then they would not be read by our own card readers.

'The PVC carries the information of the voter which is in our database. We refrain from using the card readers for voting because the constitution is against it. We have cases where corps members were forced to alter accreditation figure but now if the number of the votes cast is different from the number accredited, the entire result of the polling units will be cancelled.

Jega said that if security would be guaranteed in IDPs' camps, INEC could make arrangements to take care of them.

He said, 'There is an online system where people can find out details of their registration. Ghana used card readers and it was relatively successful. Likelihood of card reader's failure is very remote.

'Its usage will not violate either the electoral act or the constitution. There is difference between voting and voting process. We are well advised we are on solid legal standing on the issue.'

He added that INEC did not ask for card reader usage in the Electoral Act because it was not necessary since the existing law guarantees the arrangement.

He said the PVCs would be permanent because it could last for 10 years, adding that 'by 2019 we hope that the National Identity Card project would have materialised so that INEC could draw out the data of people of voter age from the NIMC database.'

Jega added,   'Whereas section 52 of the Electoral Act   prohibits the use of electronic voting, the card reader is not a voting machine and it is not used for voting, it is merely an electronic device introduced to improve the integrity of the voting; process.

'It should be remembered that sections 78 and 118 of the 1999 constitution grant INEC powers to register voters and to conduct elections in Nigeria. Using the card reader has enormous advantages; first, once it is configured, it can only read PVC   issued by INEC at the polling unit that it has been configured. Second, it reads the embedded chip card not the back code.

'Third it enables authentication of the identity of the voter by matching his or her fingerprint with the code on the chip of the card. Four, it keeps a tally of all cards read and all cards verified or authenticated with all their details, including the time when this was done.'

The demonstration of the card readers on the floor of the Senate was commended by Senators Bukola Saraki and Ita Enang, who said the development had shown that INEC was fully prepared for the polls.

Senate President, David Mark, in his closing remarks said the Senate had confidence in the ability of the electoral umpire to conduct free, fair and credible elections.

He, however, urged the management of the commission to feel free to contact the leadership of the National Assembly for any assistance that would make the elections a huge success. - Punch.