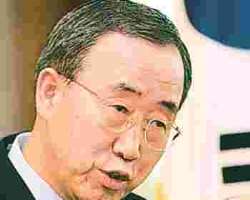 United Nations Secretary-Gener
Parents of children living with autism and the United Nations have said that there is need for increased awareness about the condition.

The UN Secretary General, Ban Ki-moon, in a statement issued in New York on Thursday to celebrate the World Autism Day, said, ' By combining research and awareness-raising efforts, we can provide adults and children with autism, the protection, support and full membership of an inclusive society.' April 2 is World Autism Day.

Autism is a condition characterised by qualitative impairments in social interaction; communication as well restricted, repetitive and stereotyped patterns of behaviour, interests and activities

Ban said that autism was a complex and inadequately misunderstood condition, adding that people living with it should not be discriminated against.

According to him, the UN Convention on the rights of persons with disabilities is a powerful tool to redress discrimination against people living with autism.

He stated, 'It aims to promote equal enjoyment of all human rights and fundamental freedoms by persons with disabilities. As of today, 144 countries have signed the convention and 83 have ratified it.'

He added, 'World Autism Awareness Day is dedicated to creating greater understanding about autism and promoting universal adherence to the UN Convention.

'As we commemorate World Autism Awareness Day 2010, let us remember that each of us can take on that responsibility. Let us join persons with autism, their families and their advocates in a community of voices for greater awareness and understanding.'

Also, the facilitators of Defeat Autism in Nigeria, Mr. Chidi Izuwah and Dr. Doris Izuwah, noted that in Nigeria there was little formal recognition of autism as a distinct disability.