Nigerians must learn to respect the nation's security forces – Jonathan 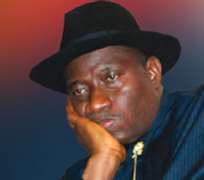 President Goodluck Jonathan has said that Nigerians must learn to respect members of the nation's security forces because while they sleep in their houses, the security men are on the streets making sacrifices.

Jonathan spoke during a presidential dinner he organised in honour of widows of the nation's fallen heroes at the Presidential Villa, Abuja.

He said he decided to host the widows, the first in the nation's history, because his government appreciates their husbands who paid the supreme sacrifice while securing the nation.

'Most of you (the widows) would have been surprised that why should the President call us here. It has not happened before. This is the first time that the President would be interacting with the wives of the fallen heroes.

'We appreciate the services of your husbands and your fathers within the armed forces and other security agencies, because we sleep while they are in fears and while protecting the nation, some of them paid the supreme sacrifice.

'That is why I personally get worried when some public utterances that are not expected are made of them.

'What keep us together as a nation are the activities of these people. I use this opportunity to call on all of us Nigerians to continue to show gratitude and appreciation to our security services,' he stated.

Jonathan promised the widows and orphans who attended the dinner that the Federal Government would continue to support them.