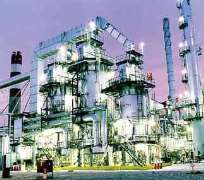 THE Group Managing Director of the Nigerian National Corporation, Mr. Mohammed Barkindo, has expressed his opposition to the planned privatisation of the nation's refineries.

Barkindo has also hinted of an imminent downsizing of the staff strength of the NNPC, especially at its corporate headquarters in Abuja.

According to the NNPC boss, it will be contradictory and counter-productive to embark on the privatisation of the corporation at a same time when the national oil company was thinking of transforming into a world-class company.

He spoke at the formal inauguration of the corporation's transformation agenda at the Kaduna Refining and chemical Company.

Barkindo argued that the successful implementation of the Vsion 2020 agenda depended largely on the successful transformation of the NNPC into an international oil company, adding that most of the 4,000 employees currently working at the corporation's headquarters in Abuja were not actually needed.

The NNPC boss expressed regrets that the corporation had remained an inactive investor in the nation's upstream sector. The planned privatisation of the refineries, he said, would make it impossible for the nation to have a national oil company.

Barkindo further said that if the NNPC would continue to be relevant, it must strive to maintain international presence.

'You cannot be a successful national oil company if you are only operating within the shores of your country. Other companies that were created at the same time with us have conquered their environment and they have ventured offshore, competing with other IOCs.

'This is what NNPC must do and we have the people to do that. We also have to operate across the entire supply chain. You cannot be a successful NOC and you say you are privatising your refineries. That is the greatest contradiction of the century. So, the NOC must own its refineries.

'It must operate upstream, it must process its production; it must market its production and so, it must cover the entire supply chain because that will teach us the strategic autonomy that we have yearned for.

'In the past attempts at transformation that failed, this issue of strategic autonomy was at the core of the dispute. I think that this is now settled because we have to be financially focused as a corporate entity, now divorcing ourselves of all the conflicting roles of policies as well as regulations.

'A national oil company must face all the business of oil and gas. We must at the same time, align ourselves with national economic growth aspirations so that by January 1, 2020, we will be counted among the 20 leading industrialised countries of the world.

'This is the national aspiration and everyone agrees that we should aspire to join that club by 2020. But this aspiration can only be realised if NNPC is transformed because the Nigerian economy depends on you and not on the other sectors,' he said.

The NNPC boss stated that inspite of the dismal contribution of 29 per cent to the nation's gross domestic product by the corporation, the strategic autonomy that the new company would enjoy would come with operational independence.

'We must be self-financing and don't have to depend on government. To achieve this, we need to have a distinctive competitive edge and we must have quality assets and to this, the Acting President has indeed committed himself that NPDC must be given these assets. We have therefore launched this transformation transition programme which will last for 12 to 18 months and it will involve the capitalisation of the operating units.

'Kaduna Refining and Petrochemical Company, limited will be recapitalised and the issue of limit of authority will be irrelevant and with that, we don't need to see your MD for approval because he will have to swim or sink with his financial statement. I am confident that with your active support that he can do it.'