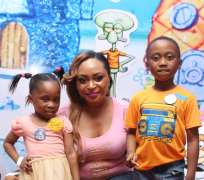 The screening, which held at the Genesis Deluxe Cinemas, The Palms Mall, Lekki featured various fun activities including games, face painting as well as a photo session with SpongeBob. The movie, which lasted for over an hour had kids singing along with excitement to the SpongeBob songs all through the premiere.

"Nickelodeon is really excited to put a smile on the faces of the kids, thats why the team came together to create an experience for families to see a different side of SpongeBob and we hope they all enjoyed the movie" Head Marketing and Communications, Viacom Africa, Colette Otusheso said at the event.

Spongebob Squarepants has won the hearts of many kids across Africa with a series of entertaining episodes. The SpongeBob The Movie: "Sponge out of water” is now showing at the cinemas.