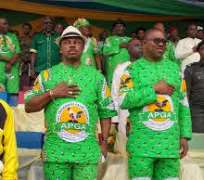 Obiano had told the former commissioners and appointees in Obi's government that PDP as a party is full of mad men, the likes of Engr Arthur Eze and Chief Chris Uba. The issue is already creating tension in the camp of Chief Chris Uba and Prince Arthur Eze's camp, both top ranking members of PDP.

When www.odogwublog.com contacted those who witnessed the meeting; they confirmed the allegation reiterating that Obi has joined the group of mad people.

Obiano allegedly said he knew that madness was inherent part of the PDP, hence, he advised Mr. Peter Obi not to join PDP, but he refused.

Obiano allegedly said according to a participant who would not wish to be named, “Obi has joined PDP and by that he has joined the band of mad men, tell me how he would not become a mad man''.

Obiano claimed that, even the President has confided in him that he was not happy that Peter Obi joined the party.

Newsmen are worried that Obiano should have known that whatever happens at that meeting would be leaked as men and women who worked for Obi for 8 years still have something for him.

Obiano at the meeting appealed to them to support him and make sure APGA's candidate Chief Victor Umeh is delivered. He encouraged any with a registered company to bring the name of the company to him for contract jobs as part of empowerment. He assured them that he has 8 years to stay as the Governor and that there would be plenty of good things to enjoy.

“Look at the champagne you are drinking now, did you drink it when Obi was the Governor. The highest he gave you was two oceans that are sold N1000 per Bottle”, he said.

Obiano told them that he had been made the State Coordinator of Goodluck Campaign by the president himself and that soon money will be released directly to him.

Obiano did not spare Chief Peter Obi, he allegedly said that though he is a good man, but that he was tricky and that if he tells you to stop you should run and stop if he tells you to run. He said he was in his swimming pool enjoying himself when Obi called him to become the Governor and that he was a rich man before coming to Anambra State.

He gave them Rice, Tomatoes, Wine and N200, 000 Naira cash each, which he baptized as Christmas gifts.

The meeting was called after lengthy meeting of APGA on Monday night during which APGA stakeholders, especially Chief Maja Umeh, the former Commissioner for Information told him to reach out to everybody in order to deliver Victor Umeh.

It was gathered allegedly that most of the commissioners did not attend the meeting and pleaded with him to reconcile with Obi before calling them to such and that some allegedly returned the gifts.

But when newsmen contacted Governor Willie Obiano on the issue, he dismissed the allegations saying that it was in the figment of the imaginations of the peddlers of the rumours.

Obiano's views were presented by one of the conveners of the meeting and Member 1 in the Local government service commission, Dr Uju Okeke who was Commissioner for Education during Peter Obi's administration.

''My Governor , Chief Obiano did not say anything against the President or the Peoples Democratic Party (PDP) in that meeting , it was handiwork of bad belly people who are still aggrieved for not returning in the cabinet and mind you there is no way everybody will be in the cabinet.

'' You are my friend so if the Governor says something like that I will tell you but in this particular meeting he did not say such. He pleaded with those still aggrieved to sheath the sword as the party APGA made them whatever they are today and should always be paramount to pay back to the party hence his resolve to appeal to them to identify with the party and ensure all APGA candidates win in the 2015 general elections''