Ronaldo slammed for partying after defeat 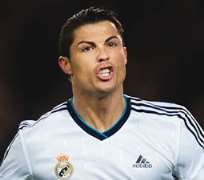 'Pictures of the celebration did not go down well with Real Madrid's captains' Iker Casillas and Sergio Ramos, Marca wrote on Monday.

Participants including Colombian singer Kevin Roldan, who was invited to entertain guests at the party, posted photographs on social networks of Ronaldo and various grinning teammates.

'The online social networks were on fire with fierce criticism from fans,' reported Madrid sports newspaper AS.

Disgruntled Twitter users even generated a special hashtag, #lafiestadeladeshonra, or 'party of disgrace'.

Cristiano's agent Jorge Mendes told Cadena SER radio station on Sunday he himself was 'very annoyed' by the photographs.

'When there is an event that is totally private and then you see someone is leaking pictures of it, clearly you get annoyed,' Mendes said.

The agent said the player was 'gutted at the defeat' — a claim echoed by other figures close to Ronaldo, including Chelsea and former Real manager Jose Mourinho.

'People spent the first two hours of the party encouraging him because he was sad about the defeat,' Mendes said. Agency news