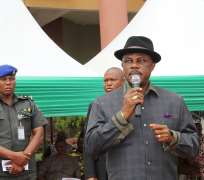 The much talked about Nigerian general election is here.

Unlike the four preceding ones that saw the ruling People's Democratic Party(PDP) enjoying the monopoly of power, coalitions in the past one year have yielded a stiff competition with the emergence of the All Peoples Congress(APC), and a resurged All Progressives Grand Alliance(APGA), under the indefatigable leadership of Governor Willie Maduabuchi Obiano flying its governorship flags in at least seven states of the federation.

The stiffness of the contest this time around is summarized by the respected head of President Jonathan's campaign team, Professor Jerry Gana when he warned at the start of his party's presidential electioneering, that it will not be business as usual. He asserted that his party's dominance in the past sixteen years could become a disadvantage, if Nigerians are not convinced of the husbandry of their mandate in this long period. Ethnicism, a long factor in the Nigerian ethos, again holds sway in the Nigerian plural society, deciphering which platform will serve the interest of their people better.

Past cathecisms against ethnicism in Nigeria have become mere verbiage, given the reality of power equation against the backdrop of appurtenances and perquisites of politics, power and governance. So, it is no surprise that the so called minorities have found a comfortable cover under the federal government led by their son Goodluck Jonathan for example. Utterances and actions by this group lend credence to this. It is important to point out that such diversity as in Nigeria can be a great advantage if wisely explored as in the popular saying that Nigeria's diversity can be "unity in diversity".

Actually, before states' creation and attendant statism, Nigerian politics was a "global" national phenomenon, with politicians propagating their philosophies and manifestoes across the land.

Thus, whereas there were strong allies of Chief Obafemi Awolowo in the South of Nigeria, with late erudite legal luminary Philip Umeadi(SAN) running with him as Vice Presidential candidate in 1979, Awo's son Wole, was an unrepentant frontliner of the Zikist Vanguard in the fifties.

Also it is an interesting twist in the history of Nigerian patriotism and nationalism that Awo himself at the founding of the Nigerian Tribune newspaper on November 16 1949, said it was in honour and respect of Zik's enigma in newspapering and journalism that made him mark Zik's birthday with the Tribune. It is also a historical fact that until the carpet-crossing saga in the Western Nigerian House in 1951, Nigerians aspired to any political position anywhere in the country.

Governor Willie Obiano's recent political outing to Ogun State for the flag-off of the 2015 governorship in that State, Oyo and the South West, is therefore a welcome development in our country's political history. While giving the flag to the APGA guber hopefuls for Ogun and Oyo states, he harped on the need for change in the country's politics.Against the backdrop of his helmsmanship as governor of Anambra State in the past few months, and national leader of APGA, it was an easy sell for him, show-casing his numerous achievements.

Speaking also at the Governor's Lodge Amawbia recently, the immediate past information minister and APGA guber flag-bearer for Nassarawa State, Labaran Maku said he was emboldened by Governor Obiano's sterling qualities. He said the wind of change brought by Obiano will bring victory to APGA in Nassarawa State in the coming elections.Same story repletes in other states in the South East, and the North.In the unfolding scenario, well-meaning Igbos are worried about the lot of Igbo people in contemporary Nigerian politics.

Of all the political parties, only APGA provides the Igbos a strong foothold. Just like in 1979 when Zik's Nigerian Peoples Party provided the Igbos an impregnable shelter, the APGA under the great late hero, Chukwuemeka Odumegwu Ojukwu, catered for them.

The greatest trial for the Igbo people came shortly after Governor Obiano took the mantle of leadership, with the betrayal of APGA and the Igbos. It was by God's grace and uncommon bravery that Governor Obiano put this behind him and moved on to the admiration of friends and foes.

He has remained focused, pursuing his people-oriented programmes, earning him first on all fronts. Since his assumption as the Board of Trustees(BOT) chairman and national leader of APGA two months ago, there is a general consensus among Igbo people, regardless of party, that their new leader had emerged. What with the recent right of passage he, in unison with Igbos all over, accorded all Igbos who lost their lives in past wars, including the world wars, the Nigerian civil war and other circumstances that claimed the lives of innocent Igbos unsung.

No doubt, that was the climax of this focused governor in clinching the coveted "crown" of Igbo leadership. For Igbos, and indeed all members of the human family all over the world, burial rites for the dead are rituals that separate the dead and the living, and make the soul of the departed rest in peace. Titled "Ozoemezina", Governor Obiano said that never again will such blood-lettings that took so many lives happen again. He believed that the non-performance of the rite affected progress adversely, and that now that the needful had been done, things will surely be better for his beloved Igbo people. At the ceremony were Igbos from all over Nigeria, including dignitaries like the former Vice President, Dr Alex Ekwueme and his wife, Engineer Arthur Eze, Chief Otti, Col, Iheanacho and others too numerous to mention, especially the young, old and the proletariat.

Apart from this monumental achievement, Obiano's many feats mark him out as a selfless leader with outstanding pedigree to qualify him as the qualified captain to navigate the Igbos to very safe coast.

A man of his words, Akpokuedike global as he is fondly called by his numerous admirers, is brave enough to admonish his followers to do as he does, and not just as he says. With his innumerable achievements, it is time to blow his trumpet loud and clear.

For a man who in a jiffy upon becoming governor changed Anambra State from the most crime infested to the safest in the country, he deserves the choicest accolades.

Astute manager of finance and men, the most crucial of the factors of production, it is no surprise that within so short a time, he had attracted the global investment community to invest a whooping $382.3million(N62billion) in strategic sectors of the economy.

Joseph Agro Ltd had pumped in $150million into the Omor rice mill project in Ayamelum LGA, while the Cardinal Developers Trust Ltd are investing $70million in the four-star hotel in Onitsha, to mention but a few.

The Anambra Promotion And Protection Agency(ANSIPPA) established by Governor Obiano, last December, got richer by $1.5billion in investments arising from other MOUs.

Coched Farms Project, a subsidiary of the Coscharis Group has set up an office along the Enugu-Onitsha Expressway and has since mobilized workers to its farm settlement in Anaku.

To drive these, Governor Obiano has put in place, 1,874 co-operative societies, to catalyse the revolution, to be trained and prepared in modern technics of mechanised farming.

As part of his compassionate humanism, he has set up scholarship programmes for the physically challenged alongside the exceptionally gifted and brilliant children.

In recognition of his exceptional governance, he has been recognized by many local and international bodies.

The International Multimedia Networks and Public Policy organisation, USAfrica has adjudged him the Nigerian Governor of the year 2014, " based on the USAfrica Governance index for combining effective management, practical results and grassroots social responsibility since the blast of his Anambra Governorship whistle on March 17 2014".

As the undisputed new leader of Igbo people, it is time for them to take the bull by the horns by taking their destiny in their hands.

This they can only do by voting right.
As Governor Obiano has counseled time without number, the electorates of Anambra State, and indeed all Igbos and democrats all over Nigeria should cast their lot to President Goodluck Jonathan for the presidential poll, and the APGA for the other polls, from the governorship, Senate, to the houses of assembly.

This will re-enact the Igwebuike and Onye aghana Nwanneya credos of Igbo communalism, and aggregate democratic libertarianism for all progressive Nigerians.

This is the clarion call of the people's Governor, Willie Maduabuchi Obiano(Akpokuedike Global), as Igbo nascent consciencism 2015. A word is enough for the wise!