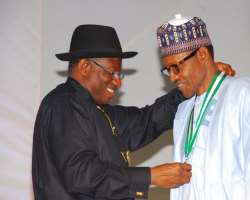 As Nigeria prepares to elect her next president by February 14, 2015, the flurry of activities in the nation's political arena has taken on an interesting dimension. Political parties continue to bombard the electorate with manifestos while also launching attacks against the credibility and competence of perceived opponents. The dynamics of this exchange have steadily increased in magnitude, morphing into what may be regarded as a media war between the two most popular candidates, President Goodluck Jonathan of the Peoples Democratic Party (PDP) and General Muhammadu Buhari of the All Progressives Congress (APC).

I have watched devotees of both aspirants argue blindly in an attempt to paint their favoured candidate as the messiah while discrediting the reputation of the opposing party. Anyone who takes time to observe the trend would be amazed at the population of Nigerians that have chosen to be pawns in the hands of political opportunists. Instead of doing due diligence to base their choices on an informed perspective founded on verifiable facts, most people would rather join the bandwagon of public opinion.

I am particularly intrigued by anti-Jonathan propagandists who are bent on discrediting the achievements of the present administration against all visible evidence, and it is this set of people that I would like to address in this article. Particularly for the benefit of those who have unwittingly believed the lie being sold by enemies of transformation, I have taken it upon myself to point out some of the footprints that the Goodluck Jonathan administration has made in the sand of time. I'll be focusing on the education sector in this article.

Furthermore, this government has significantly increased access to education with the harmonisation of Islamiyya and Basic Education curriculum for implementation in Almajiri schools, construction of 125 Almajiri schools and establishment of nine federal universities. New private universities were licensed by the GEJ administration, bringing total number to 50. Over 100 Innovation Enterprise Institutions have also been licensed to provide technical and vocational education and training.

Talking about educational facilities and infrastructure, the GEJ administration rehabilitated 352 laboratories and constructed 72 new libraries in Federal Unity Schools. Laboratories in the 51 federal and state polytechnics have also been rehabilitated with state-of-the-art equipment. In addition to infrastructure, the government also invested heavily in manpower and capacity building with 7,000 lecturers of federal and state tertiary institutions sponsored for post-graduate studies home and abroad.

Funding is another area where the commitment of this administration to the education sector is being felt. The government set up a High Impact Fund to support higher institutions of learning under which each selected university gets three billion naira while polytechnics and colleges of education get one billion naira. How about the special presidential scholarship scheme for our brightest brains? As part of this scheme, the Jonathan administration awarded a total of 101 Presidential Special Scholarships for Innovation and Development (PRESSID).

Isn't it interesting that with all these clearly visible achievements which are only a tip of the iceberg as regards the achievements of this government in the education sector alone, some folks have simply refused to see anything good about Jonathan and his government? We can go on and on to talk about the successful privatisation of the power sector, the overhauling of our airports, road construction and rehabilitation, revival of the railway infrastructure and a host of other achievements.

It will take someone that is blinded by sheer ignorance, partisan sentiments or similar factors to discredit the performance of Goodluck Jonathan. It is in the best interest of Nigeria that President Goodluck Jonathan's administration be given a chance to deepen and further extend the process of transformation which it had begun to a point where it will be irreversible by subsequent governments.

Disclaimer: "The views/contents expressed in this article are the sole responsibility of the author(s) and do not necessarily reflect those of The Nigerian Voice. The Nigerian Voice will not be responsible or liable for any inaccurate or incorrect statements contained in this article."
Articles by Olusola Daniel
27-4-2016  If I Were To Do It Again, I Will Vote Buhari!10-12-2015  Oshiomhole: From “comrade Governor” To Empty Barrel24-11-2015  Diezani Alison-madueke’s Desperations 24-8-2015  Why Governors And Oshiomhole Are Bullying Okonjo Iweala13-8-2015  Nigerian Economy: Detractors Can’t Rewrite HistoryMore...