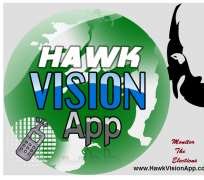 We will like to introduce the HawkVision election monitoring App for free download and use by all Nigerians towards protecting the upcoming general elections..

Subsequent to the pressing issues of election rigging which threatens the hope of Nigerians for true and fair, credible elections, and the critical need to coordinate the monitoring of the electoral process; ENDS.ng is happy to offer Nigerians an effective free solution for participatory use by all Nigerians to protect their votes and the community.

HawkVisionApp: The Essentially Needed Technology
The HawkVisionApp is a revolutionary election and social irregularity documenting mobile application that has been developed with priority to checkmate election rigging during the February 2015 general elections. The App has been presented and demonstrated to major political parties in Nigeria.

The HawkVision application, which currently runs on android mobile devices, captures events (images and videos) real time and stores them with date and location stamp to a central secure server. These files can then be called up and the exact location, mapped using Google maps, with the data accessed with exact time and sender information.

How it works:
All Nigerians with Android phones download the App to their phones and ready to protect the voting process.

At all polling locations, proactive citizen volunteers are urged to capture pictures and videos of any usual, unusual and suspicious activity including availability and access to grounds, behavior of the electorate, the police and electoral officers.

Captured images and video only need to be uploaded through the App and the work is done.

All images are automatically filed according to Polling booth location and stored with time stamp, geographical location and user phone number for confirmatory contact and possible follow-up.

Access to the data is available to the media, government officials, the police, international monitors and other concerned individuals and groups wishing to investigate and review the captured electoral process.

The HawkVision team diligently scours through the data to identify infractions and proceeds to investigate and refer such evidences to necessary authorities and organizations.

The geographical and time and date stamp ensures authenticity and credibility of all evidence gathered.

The HawkVisionApp further enables election monitoring in remote and terrorized locations like the Boko Haram plagued northeast where safety-conscious citizens are available and have downloaded the App.

Speaking at the launch of the App, the HawkVisionApp technology team said:

"Nigeria is too big a country to be manipulated by a handful of people. We developed this app to help solve the problem of election rigging in Nigeria. We believe that Nigeria has all it takes to succeed. What we don't have is good leadership. A certain subset of the population keep manipulating the system and denying the people of the leadership that they truly deserve. We need to take our destinies into our hands and we believe that the HawkVisionApp is the appropriate vehicle to do that"

"Let me use this simple analogy, for instance if on the day of election, I go to my polling center armed with the HawkVisionApp to cast my vote. I see an irregularity, and I record it either by taking a picture or video of the activity, I can save it in the central server. I will also wait to the end of the voting process and record the collation, counting and announcement of results at the venue. All this will be captured and stored on the central database. Imagine if other voters did the same thing at each polling center. We can now have evidence with location and time to show if elections took place, if it was free and fair or if it was manipulated. This evidence will be more potent in the court of law because it can be mapped to a location and time."

The HawkVisionApp team also plans to upload all videos and images of the election process on YouTube as soon as they are submitted by users.

"We want the world to follow the election process in Nigeria. We want to put the results out there on YouTube. Our YouTube channel will constantly be receiving live feeds of videos and images from the voting centers and this information will be made free to international media. We want to take our destinies in our hands. If we have at least 10 — 15 monitors per polling booth, who dedicate themselves to ensuring that they capture the entire process, we can be sure that our candidates can be voted in."

HawkVision Believes that: "Power to the people is expressed through fair voting/electoral processes"

We invite all Nigerians to participate in protecting the electoral process; please download the www.HawkVisionApp.com now and SHARE with friends.