Children at the mercy of malnutrition 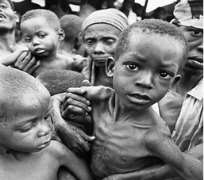 It's manifest that unending consequence of malnutrition will befall the mental and physical development of children. The World Health Organisation, WHO, had appended that Nigeria's primary health care level, remains the weakest link in effective health delivery.

In 2013, a national broadsheet versioned that six years after a 2007 Federal Executive Council approved establishment of the National Nutrition Council of Nigeria, the council was still not been set up, complained the Nutrition Society of Nigeria (NSN).

An advisor with Save the Children Nigeria was reported to have raised apprehensions that “Nigeria has not prioritised nutrition as it ought to be. Up to 33% of children who die in Nigeria die because of a fundamental malnutrition problem. Many would not have died if their nutritional status was good, and that is a fact.”

The international body affixed that this has profound implications for health and for human development and, presents a major obstacle to attainment of Millennium Development Goals in the country and globally.

The worldwide body examined that to date the Nigerian government has not provided the necessary leadership or response to the crisis. So, coupled with this, is a weak and fragmented health system, which is unable to provide the most basic, cost-effective services for the prevention and management of common health problems, said the body.

Connoisseurs had attributed the malnutrition saga to food crisis that has befallen Nigeria and, children are the most hit. Above 60 percent of an estimated 170 million Nigerian populations are severely affected. As at 2013, the ratio was that about 1.5 million children in northern Nigeria were being at the risk of immense malnutrition.

But in the face of absolute hunger, an explanation informed that Nigeria mislays on daily basis to the tone of N1b on contraband rice. The insurgents' activities in the northern part of the country have in-addition been contributing to the increasing level of malnutrition as farmers are forced to abandon their farms for their dear lives.

The estimated numbers of farmers who have abandoned their farmlands were given to more than 60, 000, with more than 30, 800 acres of rice farmlands left uncared for. The unrealistic policies of the Federal Government in the agricultural sector are aswell abetting to the food insecurity. In 2013 alone, a bag of rice mounted to N13, 000.

Products such as fish, bread, meat, cereals, chicken, yam, onions, beans, vegetable oil, tomatoes, groundnut oil and others are also on the increase. In 2013, a source reported that the Food and Agricultural Organisation of the United Nations (FAO) had in a statement issued in September, warned that Sahel States in northern Nigeria were faced with severe food insecurity, adding that poor families had used up their food stocks and were facing high food prices awaiting the next harvest.

The source sustained that the indices also noted that over 1.4 million children in the North were at risk of severe malnutrition. The source maintained that the revelation also came as scores of people had suspected that the country's Agricultural Transformation Agenda (ATA) had been usurped by dishonest operators across the country's borders; in the case of rice, the implementation of high tariffs for rice importation had brought legal imports into the country to a standstill, creating a massive demand from staple consumers.

In the presence of this, about 46,687 children were lucratively treated of acute malnutrition while 910 children were not successful by November 2014, in Sokoto State, reported the Community Management of Acute Malnutrition (CMAM), which has been in operation in that state since 2010.

The local government areas that were affected were given to include Binji, Gudu, Gada, Goronyo, Illela, Tangaza, Wamakko, Sabon-Birni and Sokoto South. The office of the Ministry of Health in the state lamented that the state government would include the procurement of RUTF (Ready-to-Use-Food) in the 2015 budget, due to the success of the CMAM. That was coming when a Nigerian Television Authority (NTA's) broadcast instructed that anyone who has visited any of the 216 Community-Based Management of Acute Malnutrition, (CMAM), sites set up by UNICEF in the seven Sahelian States of Gombe, Jigawa, Borno and Yobe, Adamawa, Bauchi and Kano may not forget in a hurry, the sight of the unfortunate Nigerian children affected by Severe Acute Malnutrition.

An online source frowned that some children, whose parents fled from Boko Haram insurrections on their communities to hiding places in the Gowza Local Government Area in Borno State, have died as a result of hunger and malnutrition. Children in states such as Ebonyi, Delta, Benue and Bayelsa were also at risk of acute malnutrition. The Federal Ministry of Health in 2013 admitted that “41 per cent of Nigerian children under age five suffer stunted growth as a result of malnutrition,” whereas Nigeria was said to have gathered in, about N9 trillion in federal revenues in 2012, reported a source.

Not only that, Nigeria as at the year in quote was the sixth largest producer of crude oil in the world. The Editorial of a national paper, July 28, 2013, affirmed that ignorant parents, who are not acquainted with healthy diets for growing up children, are a major factor in these unhealthy national statistics. The source continued that long years of the neglect of agriculture by the states concerned, which was ignited at the advent of an oil rent-driven economy, widespread poverty and the recent insecurity occasioned by Boko Haram's terror campaign, also, have seriously eroded the capacity of families in the North to feed the children.

On 2014 World Food Day, the Global Alliance for Improved Nutrition (GAIN), Nigeria, painted the need to scale up successful nutrition interventions in Nigeria. Its fear was that half of women of childbearing age in Nigeria are anemic (62%) and almost a third (29.5%) of children suffer from vitamin A deficiency, a leading cause of childhood blindness. It's understood that children in Nigeria do not enroll at school earlier due to analysis that suggested that they do not reach their full potential height due to malnutrition. They also do not reach their full potential, academically, due to malnutrition.

The information hinged the reasons why Nigerian children are set back, saying that about 29.5% of children under the age of five suffer from vitamin A deficiency. With all these, Nigeria was in the 2013 Hunger and Commitment Index placed on the menu as a 'very low commitment' country that was yet to tackle hunger and under-nutrition. According to a testimony by Save the Children, a UK-based charity organization in 2014, titled, A life free from Hunger: Tackling Child Malnutrition, Nigeria was listed alongside India, Bangladesh, Peru and Pakistan as countries faced with malnutrition.

It was observed by the group that about a quarter of parents in Nigeria (27%) appears to be struggling the most, to feed their children. For-this-reason, children go without food for an entire day. According to the World Bank in 2008 on the malnutrition prevalence, weight for age (% of children under 5) in Nigeria was reported at 26.70. Experts analysed that prevalence of child malnutrition is the percentage of children under age 5 whose weight for age is more than two standard deviations below the median for the international reference population ages 0-59 months.

The experts' data was based on the WHO's child growth standards released in 2006. The Trading Economics quoted the World Bank as saying that exclusive breastfeeding (% of children under 6 months) in Nigeria was reported at 13.10 in 2008. It defined exclusive breastfeeding as the percentage of children less than six months old who are fed breast milk alone (no other liquids) in the past 24 hours. Also, low-birth weight babies (% of births) in Nigeria were reported at 11.70 in 2008. The source defined low-birth weight babies as newborns weighing less than 2,500 grams, with the measurement taken within the first hours of life, before significant postnatal weight loss has occurred.

Conversely, NSN had suggested that to get out of this conundrum, authorities have to scale-up of community management of severely malnourished children, budget lines at all government levels for nutrition interventions and mechanisms for public-private initiatives targeting nutrition. The body in-addition suggested that the new media should be a vital portal where the nutrition intervention should be taken to, to enable communities have a property feel of the intervention than hosting conferences. A perspective also suggested that government at all levels should begin a sustainable campaign that will educate children and their parents about the importance of a balanced diet.