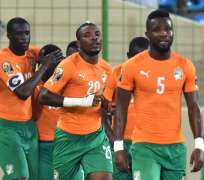 Ivory Coast qualified for the quarter-finals of the Africa Cup of Nations as Group D winners at the expense of Cameroon thanks to a slim 1-0 victory in Malabo this evening.

New Manchester City striker Wilfried Bony had the first chance of the match for Ivory Coast in the fifth minute when Max Gradel found him in the area, but he couldn’t divert home.

Herve Renard’s side continued to look threatening, especially from set pieces, before Maxim Choupo-Moting had Cameroon’s first dangerous attempt 10 minutes before the break.

Gradel was the man to find the net and he gave Cameroon keeper Joseph Ondoa no chance with a rasping drive from 25 yards.

Edgar Salli had two chances to equalise for Cameroon before the interval, but he couldn’t take either.

It wasn’t until the 65th minute in the second half that either keeper was really tested, with Bony drawing a sharp stop from Ondoa.

The tension made for a stop-start second period and it wasn’t until the 81st minute that Cameroon threatened when substitute Vincent Aboubakar sliced wide.

Moments later Ivory Coast almost put the result beyond doubt through another substitute, Junior Tallo, who forced Ondoa into a diving save.

There was plenty of stoppage time for Cameroon to find an equaliser and had they scored it would have required lots to be drawn with all four teams in contention to go through, but they were unable to do so and crash out.

In the other game, Guinea and Mali played out the fifth 1-1 draw of the group and will have to wait until lots are drawn to decide who will be joining Ivory Coast in the last eight.

Renard’s side will face Algeria in the last eight.