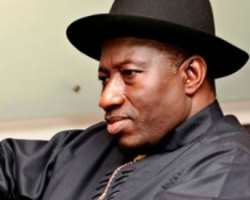 President Goodluck Jonathan has disclosed that the Nigerian military will take delivery of some additional equipment this week and next in his administration’s effort to end insurgency in the north eastern parts of the country.

He made the disclosure at Ilorin when he paid a courtesy call to the Emir of Ilorin, Alhaji Ibrahim Gambari, in his palace, before heading out for the presidential campaign.

Jonathan said he was hopeful that with the delivery of the platforms, the military would move faster within the next two weeks to curtail the security challenge.

He said, “You have observed us for the past four years. Yes, we have security challenges relating to the Boko Haram saga mainly in North East.

“Although their excesses extend to some parts of the North like Abuja, Sokoto, Gombe and Kano. But it is mainly in the North East. We are working hard and we shall surely bring it to a halt.

“As far as the military is concerned, even as we are talking, we are expecting more platforms this week and next week.

“I believe that in the next two weeks or so, we will be able to move faster than we are moving.”

The President said his administration has also moved fast in many areas like the road network.

While admitting that work is still in progress, he said no government could fix all the country’s problems in four years.

“We have intervened in so many areas; agriculture that touches the life of an ordinary Nigerian is one of the areas that we have been working very hard.

“We are trying to move agriculture to the next level; a level that young graduates will be able to embrace,” he said.

He reiterated his administration’s commitment to pushing the country forward and providing jobs for young people as well as to diverse the economy.

He said he was in the Emir’s  palace to personally inform him that he was interested in seeking re-election.

Jonathan also introduced the party’s governorship candidate in the state, Senator Simeon Ajibola, to the monarch.

He said under the PDP, people of the state would  continue to enjoy freedom and quality of life.

The Monarch said he was convinced that the President has done very well having watched his performance over the years.

He prayed that God would crown the President’s effort with success.

He urged all politicians to conduct their campaigns without violence.

He said since he heard of the President’s campaign trip to the state, he had been praying to God to make it hitch-free.

Earlier, the national chairman of the PDP, Alhaji Adamu Muazu, had told the monach that the delegation was in the palace to seek his support and prayers so that the PDP could continue the good work it had started.