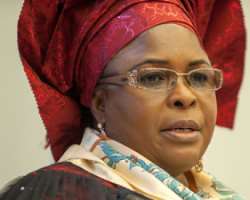 Wife of the President, Mrs. Patience Jonathan, on Thursday said nobody or group could threaten her if she decided to visit any part of the country.

Mrs. Jonathan, who spoke with one of our correspondents through her media assistant, Ayo Adewuyi, was reacting to statements by some youth groups threatening to disgrace her if she attends the grand rally of the Peoples Democratic Party in Yenagoa on February 5.

Two youth groups - Bayelsa Youth Vanguard and the Mangrove Boys of Bayelsa - had, in different statements, issued in Abuja and Yenagoa, barred the President's wife from accompanying her husband to the rally in Yenagoa, Bayelsa State capital.

The youths, who accused Mrs. Jonathan of instigating political crisis in the state and working against Governor Seriake Dickson, had vowed to embarrass and disgrace her at the rally.

But the spokesman for the President's wife described the groups as faceless.

He said Mrs. Jonathan would not be cowed into avoiding any part of the country because of threats from such groups.

He said, 'We will not descend so low to be joining issues with faceless groups.

'The fact however remains that the First Lady as the wife of the President cannot be threatened by anybody or any group if she decides to visit any part of the country.'

Meanwhile, the Bayelsa State Commissioner of Police, Mr. Valentine Ntomchukwu, has issued a warning to some youth groups threatening to disgrace the wife of the President if she attends the grand rally of the PDP on February 5.

Two youth groups - Bayelsa Youth Vanguard and the Mangrove Boys of Bayelsa - had in different statements issued in Abuja and Yenagoa, barred the First Lady from accompanying her husband to the rally in Yenagoa, Bayelsa State capital.

But Ntomchukwu, while addressing a select journalists in Yenagoa on Thursday, urged members of the public to disregard the threat, saying it was the handiwork of some faceless groups.

The commissioner said, 'I want to appeal to the general public to come out in large numbers to welcome the President and the First Lady who have done so much for this country. So, these miscreants cannot disrupt the peace of Bayelsa.

'We have been enjoying peace and even on that day we will be celebrating because it is the day the President is coming, not necessarily as the PDP, but as the President of the Federal Republic of Nigeria. So, they cannot come and tarnish the image of President in his home state. '

Ntomchukwu said the police would provide adequate security for the President's wife and other political groups visiting the state for rallies, campaigns and legitimate businesses.

He asked the BYV and the MBB to desist from making such provocative and inciting statements, which he said, were capable of puncturing the existing peace in the state.

He added, 'The police will not hesitate to deal decisively according to the extant laws with any such groups when arrested. I want to assure you that we are already trailing the Mangrove Boys anywhere they may be.

'So, my advice is that these boys should just go away from the state entirely because since they have done this publication, they have put themselves on the firing line and we are definitely going to pursue them.

'We are operating with intelligence and all the security agencies are at our disposal. As soon as we catch them, they will face the wrath of the law. Even though they are faceless, any time they become visible, we are definitely going to deal with them.

'We are asking the well meaning Nigerians to come forward and give information not only on these boys but on all criminal activities. We have already identified them by their names and we are trailing them.'