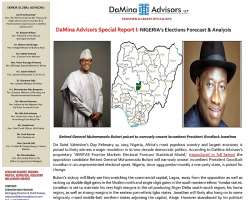 DaMina Advisors, a leading provider of risk advisory services for emerging markets registered in five countries, with a focus on Africa, has predicted a victory for the APC presidential candidate, MuhammaduBuhari, in the February 14 th , 2015 presidential elections.

Using its VERITAS Frontier Markets Electoral Forecast Statistical Model, the firm predicted a close election, with an eventual victory for Buhari by 700,000 votes, with both candidates meeting the second constitutional requirement of getting at least 25% of the vote in 24 of the 36 states of the Federation.

The extent of voting possible in the North East is expected to play a key role in the outcome of the poll, with the firm citing a run-off as a possibility.