Anambra Assembly Outlaws Campaign By Aspirants Screened Out By Inec 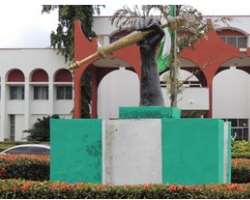 The Anambra State House of Assembly on Tuesday passed into law a bill prohibiting political aspirants whose names did not appear on the final list of candidates cleared by the Independent National Elections Commission (INEC) to stand for elective posts in the coming general elections.

Titled “Breaches of the Peace and Unlawful Assemblies Law, the legislation which took immediate effect from January 20, 2015 stipulates in Section 3 (1) that: “A person shall not advertise, publish, and solicit for votes for or otherwise engage in any campaign for himself or for a person whose name was not duly published by INEC or ANSIEC or any other electoral body within Nigeria as a nominated person for any election within Anambra State.'

Section 3[2] also states that 'Any person who acts in contravention of subsection [1] of this Section is hereby declared to have engaged or to be engaging in an unlawful assembly with intent to cause public disorder and breaches of public peace.'

The bill falls in tandem with the provisions of the nation's electoral laws as well as the constitution of the federal republic of Nigeria.

The bill which was presented by the Majority Leader, Hon Harford I. Oseke, representing Awka South 2 Constituency, went through the first, second and third readings without any dissenting voice. The sitting dissolved into committee of the whole house for consideration and debate of the provisions of the bill after it sailed through the second reading.

Consequently, Section 3 [3] of the bill was amended to read: 'Any person who engages in unlawful assemblies or acts in such a manner as to cause public disorder and breach of public peace as referred to in subsection [2] of this Section commits an offence and is liable on summary conviction to a fine of N1, 000,000 {one million naira] or to a term of one year imprisonment or to both such fine and imprisonment.'

The bill was read the third and final time and passed into law. Commenting on the merits of the legislation, Hon Paulinus Ifechukwu described it as proactive. 'This bill will solve a lot of problems especially about candidate impersonation. It will create the atmosphere for proper campaigns and elections. It will avert chaos in the 2015 polls in Anambra State.'

Hon Rita Maduagwu representing Nnewi South 2 constituency said the excesses the bill sought to curtail were such over which INEC officials had pleaded helplessness. She noted that the lacuna in the electoral laws was being exploited by some aspirants to self declare themselves candidates.

The Speaker of the House, Rt Hon Chinwe Nwaebili remarked that the crucial importance of the law called for its 'aggressive implementation.'

Moving a motion for adjournment, the Leader, Hon Oseke commended Governor Willie Obiano for the restoration of peace and security in Anambra State which was glaring during the Christmas and New Year celebrations. Hon Kenechukwu Chukwuemeka [Awka South Constituency] lauded Governor Obiano for his vision of development.