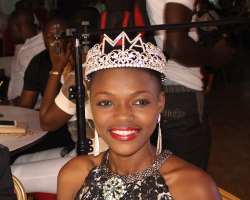 Her reign as Miss West Africa International 2013 might be over, but her goodwill still continues. Hawa Kamara, recently stated “Sierra Leone is putting an end to it's Ebola epidemic, but Ebola was not just an illness that came and went like the flu, a lot of families were destroyed, children, adults, girls and boys. So the question is when we say we have ended Ebola, that is great, but if we do not react to the aftermath, then we have not ended the destruction of the illness”.

Hawa Kamara is also originally from Sierra Leone is currently reaching out for celebrities across west Africa to consider supporting victims of the Ebola epidemic aftermath via her non profit organization Girl Pikin 4 Betteh. An organization that focuses on young girls who are now more vulnerable to the ills of society due to lack of wealth, family and/or homes.

“The problem is most of Africans in 'non-hit' Ebola countries see the issue we face as something separate to them, we need to remember that the only thing that separates us here are man made borders in Africa. In fact if some of these countries were as big as Nigeria, what ever happened in their neighboring country would be considered as their national problem. We need to work together, If you are comfortable, give up a little time for others so we can all have a decent life, and this is what Gal Pikin 4 Better is about. If our celebrities are capable of pouring Ice water on you for disabilities in foreign countries then we can trust your ability to be involved in this”

The Gal Pikin 4 Betteh organization would be in full effect and active before mid 2015. For now the work is being put on the ground to raise concern and support for victims of the Ebola epidemic, mainly young girls who might not be given a chance at a trade, or skill and might be pushed through the wrong channels of life.