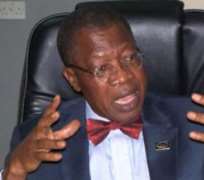 The All Progressives Congress says the Department of State Service has been bastardised by the Peoples Democratic Party-led Federal Government to the extent that it has become a mockery of intelligence-gathering.

The party, at a news conference on Sunday by its National Publicity Secretary, Alhaji Lai Mohammed,   faulted allegations by the spokesperson for the DSS, Mrs. Marilyn Ogar, that it   planned to hack   the database of the Independent National Electoral Commission.

It said since INEC's database was not connected to the Internet,   hacking its computers was impossible.

'The allegation that the APC planned to hack INEC voter registration database is false. The fact that the DSS made the allegation at all shows that it does not understand the concept of hacking. This   is pathetic for a primary intelligence agency of its stature.

'We are not aware that INEC has made a complaint of anyone or group trying to hack   its system. The DSS 'findings' are baseless as INEC'S database is a reflection of the registered members with the Permanent Voter Cards.

'Please note that of the time of the DSS raid on our office in Lagos, the PVCs had already been printed. Therefore, of what value would it be to hack   the system and input more names?

The part also   said it never registered under-aged people as alleged by the DSS.

According to the APC, when the security agents raided its Lagos office last November, they confiscated empty registration forms along with used application forms.

It claimed that   the DSS affixed pictures of children unto the forms in order to discredit it.

The APC   also questioned the timing of the news conference conducted by the DSS, saying it   suspected that it was part of a grand scheme by the Presidency to disenfranchise its supporters and possibly postpone next month's elections.

'The overall motive of the raid of our offices and the so-called findings is to give the impression that the INEC voters' register has been corrupted, hence cannot be used for next month's elections.

'It is no coincidence that the DSS raided the APC Data Centre on November 22, 2014, exactly one week before the start of the PVC distribution exercise on November 28, 2014.

'The reason the DSS came to vandalise our Data Centre is because the service is working hand-in-hand with the PDP. They carried out the raids to know our party's strength in terms of membership. Please note that after the raids, many of our registered members could not find their names on the list when they went to collect their PVCs. This is not a mere coincidence,” he stated.