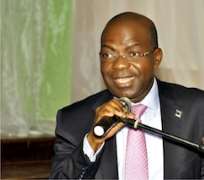 It would be recalled that Otti's name was inexplicably left out of INEC's final list on Tuesday, December 6, as the electoral body dispatched its names of eligible aspirants for different elective positions across the country. In a press statement issued immediately after the omission, the Alex Otti campaign organisation had put the error down to 'political machinations from the camp of the incumbent governor of the state who is intent on foisting his anointed candidate on Abia state', while urging for calm from the support base of the governorship candidate.

'The Alex Otti campaign organization wishes to reassure his throng of supporters that he is still in the race for the Abia State Government House. The APGA candidate's political detractors attempted a sleight of hand which saw Otti's name missing from the final list of contestants for the position of Governor of Abia State on INEC's roster. We wish to assure Otti's supporters that this error will soon be rectified by the electoral body. All lovers of Abia are required to stay calm at this period as we work to put the Ochendo camp to shame,' the statement read in part.

The former Group Managing Director of Diamond Bank is riding the wave of popularity on the stomp grounds in Abia State and has been endorsed by traditional rulers and market groups across the State; as well as by several interest groups. His campaign mantra has been focused on changing the old order in Abia State and increasing the State's Internally Generated Revenue (IGR) capacity. Otti has also laid out a fine blueprint which includes creating an enabling environment for the private sector to thrive, creating jobs and reviving the industry and the endeavour of the locals.

'I was managing over 12, 000 people, but the interest of over 4 million Abians is very important and that was why I resigned my position as the GMD/CEO of Diamond Bank to come and serve the state and to also show our people how to govern and not a situation where someone like the governor, after serving for eight years, wants to go to the Senate. I will go back to something else as soon as I leave office as the governor of the state and not jostling for one political position or the other as has become common among our politicians. I am in a hurry to bring the needed change in Aba and Abia State,' Otti had said at a campaign stop in Umunneochi community on Tuesday.

Otti is up against Okezie Ikpeazu of the Peoples Democratic Party (PDP) who is Governor Theodore Orji's anointed candidate for the governorship race.