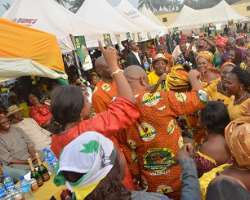 The All Progressives Grand Alliance (APGA) in Imo State has constituted a Central Campaign Council to prosecute the 2015 general elections for all her party candidates in Imo State.

In a letter signed by the chairman of the party in the state, Barr Peter Ezeobi, the council is to be superintended by Barr. Ezeobi. The party's governorship flag-bearer in the state Captain Ihenacho is the leader while Dr. Anthony Ihedoro serves as secretary.

Other members of the council include the three sitting members of the Imo State House of Assembly from the party, Hon. Dan Ikpeazu, Victor Mere and Victor Ndunagu.

In the letter, while urging members of the public to continue having confidence in the party, Barr. Ezeobi also remarked that with the recent publication of list of governorship candidates in the state by the Independent Electoral Commission, that there was no doubt that the former Minister of Interior, Capt Emmanuel Ihenacho, was the governorship flag-bearer of the party in the state.

Meanwhile, Capt Emmanuel Ihenacho has enjoined the people of Mbano in Imo State to vote him and other APGA candidates during the February 2015 general elections in Imo State.

The former Minister of Interior made this call while addressing the people of the area during electioneering campaigns at Central School Anara Isiala Mbano and Lutheran Primary School Umunakanu in Ehime Mbano L.G.A.

Capt Ihenacho said that his main reason for presenting himself for governorship election was because the resources allocated to the state from the federal government had not been properly utilized to better the lives of the people.

However, he mentioned youth employment, industrialization, qualitative education, provision of productive infrastructures and agriculture as his priority areas if voted into office.

On the issue of free education, the former minister who is also the Chairman of Genesis Worldwide Shipping Line and Integrated Oil and Gas Limited said that the type of educational policy he would introduce in the state would lead to employment immediately after graduation.

He also remarked that the reason for mass unemployment in the state was that there had not been any government in the state that had had a comprehensive educational curriculum and manpower policy that linked what is studied in schools to industrialization stating that he had the experience and vision to do so like he did in the private sector if elected governor.

Nevertheless, he condemned the sale of late Governor Mbakwe's electricity plant that was sited in Amaraku saying that he had the capacity to introduce a modernized electricity plant in the state that would encourage his vision and policy on industrialization..

Otherparty members who spoke at the occasions were the National Woman Leader of the party Mrs. Amaka Agbiogwu, the state chairman Barr. Peter Ezeobi, the Deputy Governorship candidate in the state Barr. Ike C. Ibe, the senatorial candidate for Okigwe Zone Mazi Clement Owunna and other candidates from the area.