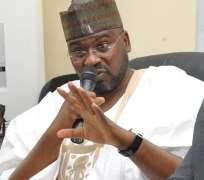 The Nigerian government has blamed a/the opposition of being behind a 5-month blackout in most of Borno state.

The reaction, apparently to a December 20th Press release by ENDS and New Year's day protests by disenfranchised residents demanding power was restored and alerting the public to the hell the people of the state were going through having no power to charge phones for communication and emergency notification, listen to news and other essentials of survival, was given by the Minister of Power, Mohammed Wakil who actually hails from Damboa, where Boko Haram allegedly destroyed the power lines. [Ref: ENDS-Stone ages: 5 Months Of Blackout In Maiduguri, Borno Isolates State Lost To Terrorists; Link: http://ends.ng/?p=1633]

In a Press release through the News Agency of Nigeria, NAN, minister of power, Mohammed Wakil said: “The blackout crisis has thus become politicised with those dark forces deriving joy in stopping power supply to Borno in other (order) to score cheap political points.”

Describing the destruction of power lines since August as being intentionally done by a so-called opposition for “political ends.”

These are by all means hefty and inciting accusations. The Minister did not specify which opposition party was behind such terrorism. Since he is PDP, is he referring to APC, LP, ANPP, APGA?

There have been strong calls for politicians to desist from incisive statements and the Minister of Police Affairs, Jelili Adesiyan has warned that there will be serious implications for such statements. It is left to see if the Police command led by IGP Suleiman Abba will press the Minister to reveal the intelligence he has pinning the terror destruction of the power lines in Borno on the opposition; and if not, if the Minister will be charged for inciting and inflaming the polity.

It was pointed out in the media that despite his state wallowing in stone-age darkness for 5 months, the Minister of state for power donated N500 million to the Jonathan fund raiser dinner that was various sectors defying INEC stipulations donating over the N1 million maximum for individuals and groups as contained in Electoral Acts 91 (2) & 91 (9).

The media then asked why such funds were not used to assist in providing security for the power lines and hence restoring power to Maiduguri, home to thousands of refugees from the lost territories of Nigeria.

But rather than get appropriate responses and the fulfillment of the sworn constitutional duties to provide security and opportunity for the citizens, the Nigerian government embarked on a libelous campaign as has been the hallmark attribute of the current administration since the Abuja Independence-day bombings where the Nigerian President immediately absolved the MEND terrorist group who had claimed responsibility for the bombing and blamed it on “northern opposition elements.”

Another question raised is if there actually has not been restoration of power for the 5-months as ENDS reported, why the Power ministry has misinformed the public on several occasions that power has been restored to the blacked-out state?

The Minister announced in a September 30th Press release in DailyTrust for instance that power had been restored to the capital. In that release Minister Wakil said: “Let me assure you all that security has been beefed up around power installations across Borno state and the entire North-East. This is to forestall reoccurrence of such vandalisation in future,” This was proven false as residents used generators to charge their phones and were able to communicate to us on the outside that we were being fed lies.

As we earlier reported, some residents and TCN workers actually accused elements in the Military of being behind the sabotage of the lines; claims we have not been able to independently verify.

Ultimately the provision of security and power to the people is the duty of the government of Nigeria. If indeed opposition elements are behind the sabotage, as Reverend Father Ejike Mbaka said, “they should be arrested by the Federal government” who have been “effective” in detaining opposition politicians in the state elections — with over 50 candidate remaining detained months after the Osun elections that media reports said had up to 65,000 security personnel assigned to [PremiumTimes, Aug 19, 2014] — and detaining Ibn Fadlallah hunter warriors who liberated Mubi; but appear unable to accost and detain terrorists and their alleged and named political sponsors in and around the government.

Additionally, we believe that due to the physical, social and mental health risks of harboring so many thousand IDPs in the blackout capital, the Federal government should utilize part of the N60 billion donated for rehabilitation of the northeast [PremiumTimes; Aug. 1, 2014] to provide temporary power, generator or solar power to the refugee camps in the capital and to as much areas possible in the congested capital city to make life possible and bearable for the people.

Importantly, if the charges of the Minister are found to be baseless and purely inflammatory, on behalf of the Nigerian people and victims on the northeast, ENDS calls on the Nigerian security services to meter justice on him.

It is time for this government to live up to their responsibilities to the people of Nigeria.