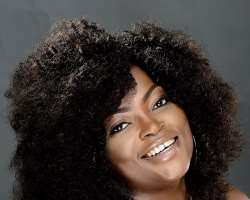 Just days into the New Year, favourite actress, Funke Akindele has rolled out plans to be more creative, tickle a funny bone, churn out more entertainment content and more attuned to her fans.

Funke, who has been climbing the popularity chart for quite a long time following her successful portrayal of the character of Jenifa that has fetched her tons of appreciation, promises a more engaging plans in 2015. While her popularity continues to soar each day, she's not resting on her oars.

In the year 2014, she did not only grab attention for her movie roles, she clinched many awards, consolidated and won major brands' endorsement deals.

Owing to her still growing popularity and consistency, Funke Akindele is poised to rule the world in 2015. She's bringing back her hugely successful portrayal of the character, Jenifa in a new television sit-com drama. From the preview, it is more convincing, impressive and evident that the character is not going to die soon. Just like the movie version, Jenifa will rule the charts in 2015 with Jenifa TV series ,TV reality show and a radio talk show.

"I actually wanted the character to take a deserving rest but I'm amazed that many years after, the Jenifa's character still resonates. Anywhere I go, it is welcome, and people love to see, hear that part of Jenifa in me. I want to believe that my potrayal of Jenifa this time will be loved more by the viewers of the drama series. There will be more chemistry with co-actors. I must quickly add that a good number of actors in the original Jenifa are involved; alongside new faces and that will be the highlight of the show.

Like most creative people, Funke is inherently curious and dares to ask questions, seek and attempt solutions in her talk show. Under her piercing gaze, she interviews compelling personalities with strengths and weaknesses, all in an attempt to maintain her audience's trust.

With Jenifa's character getting more prominent in the coming TV series, viewers will see various shades of her talent on radio and TV too. “We are doing a talk show, it has been in the offing for so long, now it is coming out of the can. It is a reality show that will touch the nerve of our socio-political existence, it is beautifully scripted. To me, it is a gift of laughter, knowledge, and enlightenment to my fans and lovers of good art."

Already, the pilot of the radio show that will roll out in February has since been produced and it is getting a critical appraisal from prospective advertisers and sponsors.

At the Jenifa TV series' audition, not less than 1, 200 promising talents showed up. "The turnout was huge, impressive. I was really overwhelmed by the number of those who came. At the last count from the register, over a thousand two hundred people with talents showed up and I've assured all those who were duly auditioned of a role either in Jenifa TV Series or Scene One movies productions and other works that I am involved."

Not a fewer hands have made contributions to pull off the much anticipated Jenifa TV Series, said Funke who has just released a set of stunning photographs. Looking resplendent in the photos by Moussa Mousssa, her glamorous look and make up by Faceville Makeover, styled by Yolanda Okereke with outfits from Havila Clothing and Accessories and Emem Morgan Clothing. All her hairdo including the long and jet black hair was made by Lamly Hair.