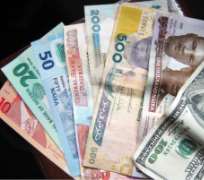 Analysts at Financial Derivatives Company (FDC) Limited have said the value of the naira will further depreciate to over N200 to the dollar on the parallel market in 2015.

The analysts in the FDC Economic Monthly Publication for December 2014 said the value of the naira is also expected to depreciate by up to five per cent at the official end of the foreign exchange market.

The naira had been classified as third worst performing currency in Africa in 2014 against a basket of fairly liquid currencies, following Ghana's cedi and Zambia's kwacha.

At the close of business last Wednesday, the last trading day for 2014, the naira sold at N183.01 to the dollar at the interbank end of the foreign exchange market. According to the FDC analysts, the parallel market rate is expected to cross N200 to the dollar as demand pressure for the greenback persisted. A N200/$ rate is only a 15 per cent adjustment as against 45 per cent devaluation in 2009. Although projecting the value of the naira is currently clouded by several domestic and exogenous factors, the fair value of the currency is expected to be between N180/$ and N195/$ at the interbank market.

The analysts noted that the naira adjustment by the Central Bank of Nigeria (CBN) is timely and the depreciation of the naira has reduced over time because the official rate is closer to equilibrium. The report, which predicted a further depreciation of three to five per cent at the official market, explained that 'this is due to anticipated impact of the global oil market spiral on external and fiscal buffers which limits the central bank's ability to support the naira. In addition, if the United States (US) changes its monetary policy stance, there might be a reversal of capital flows and an erosion of some of the external reserves.'

The nation's external reserves had during the year depreciated by over 20 per cent last year, dropping to $34.49 billion as at December 30, 2014, from $43.45 billion, which it was at at the beginning of the year. In June last year, Goldman Sachs had forecast that the naira will trade at N165/$ in three months, N175/$ in six months and N195/$ in 12 months.The analysts also foresee a rise in consumer price index.

The December 2015 economic report stated that headline inflation is expected to range between 10 and 12 per cent in 2015. In a highly import-dependent economy, some of the price effects of the devaluation will be passed to the consumer.This is based on the persistent decline in global food, energy and other imported goods and services prices. Although the devaluation of the naira is expected to increase inflation as a result of the pass-through effects on import costs, this impact is likely to be muted due to the lower global commodity prices and anticipated increase in local production of staple food crops. However, there is a marginal probability that inflation would temporarily spike above nine per cent due to the increase in electricity tariff, speculative trading around the elections and other policy developments.

Looking into 2015, the analysts said interbank rates may hit single digits while interest rates to the real sector and their cost of borrowing will remain in double digit.

'The contractionary monetary policy environment is expected to remain in 2015 but with limited appetite to tighten further. As a result, money market rates are expected to fluctuate between 9-14 per cent per annum in 2015.

'However, market liquidity will remain the underlining factor influencing money market rates. Hence, it is expected that there would be frequent CBN interventions to maintain a relatively stable liquidity position.

'Furthermore, a likely increase in the US and euro area interest rates will increase the level of capital flow reversal leading to tighter monetary policy measures.' Leadership