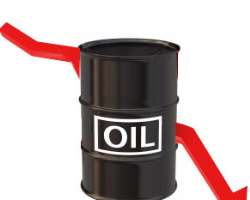 As oil prices declined further on Tuesday to their lowest levels since May 2009, the global benchmark Brent, against which Nigeria's oil is priced, tumbled below $58 per barrel.

Oil prices have been in steep decline since June as a result of slow demand growth and the United States' shale oil boom, which has increased supply.

Global benchmark Brent crude slumped to $57.47, while the US benchmark, West Texas Intermediate crude, plunged to $53.61 a barrel following the Brent downward.

The price of OPEC basket of 12 crudes, which include Nigeria's Bonny Light, stood at $54.44 per barrel on Monday, compared with $56.03 last Wednesday, according to OPEC Secretariat calculations.

Oil prices could hit $50 per barrel in 2015 and the Organisation of Petroleum Exporting Countries will be effectively irrelevant, according to the Bank of America.

Francisco Blanch, the bank's commodity chief, warned that the consequences of OPEC's decision not to stabilise prices at its last meeting would be 'profound and long-lasting,' and said that the oil cartel was now 'effectively dissolved.'

Oil prices this year are on track for the biggest decline since 2008 and the second-biggest annual fall since crude futures started trading in the 1980s.

For 2014, the Federal Government had based its N4.5tn budget on a benchmark oil price of $77.5 per barrel, but oil prices had in November fallen below the benchmark, denying the country accretion to the Excess Crude Account.

The ECA, where money over the benchmark oil price is saved, provides a cushion when oil prices fall or extra cash is needed for spending on infrastructure.

The continued decline in oil price has forced the government to adjust the benchmark price for the 2015 budget twice from $78 to $73, and recently to $65.

The Minister of Finance, Dr. Ngozi Okonjo-Iweala, at the presentation of the 2015 budget, said, 'The scenario of rapidly declining oil prices is playing out. Nigeria cannot control the price of oil, but we can control our response to it. This is what we have done by proposing a benchmark of $65 per barrel.

'We recognise that prices might still fall further but we do not intend to revise the price further down as price intelligence indicates that prices might average between $65 and $70 per barrel in 2015. This is, however, not an ironclad guarantee. So, if prices fall outside this range, the government will have to introduce further measures,' she said. - Punch.