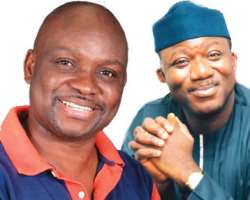 The immediate past governor of Ekiti State, Dr Kayode Fayemi has been described as a 'shameless liar' whose first name is falsehood and 'won't mind lying to his creator to gain undue favour.'

Special Assistant to Ekiti State Governor, Ayodele Fayose on Public Communications and New Media, Lere Olayinka, while reacting to comments made on an Akure, Ondo State Radio Station on Friday, said; 'Since Fayemi had admitted that Fayose left N3.5 billion in the State treasury when he left office in 2006 and not N10.4 billion as claimed by Fayose, Fayemi should also be honest enough to tell the whole world how much he left in the treasury of Ekiti State when left office on October 16, 2014.'

Olayinka, who said no amount of falsehood and image laundering can bring Fayemi back to the positive mindset of Ekiti people, added that; 'It is funny that Fayemi is embarking on campaign six months after he was defeated in the entire 16 local councils in the State, including his own local council.'

He said; 'In as a much as we do not want to join issues with Fayemi, because we know that he is still in psychological pain and trauma, having lost the opportunity of occupying the aristocratic N3.3 billion Oke Ayoba Government House that he used borrowed fund to build, we must tell him that he should desist from his life of one day, one lie, because Ekiti people can no longer be deceived by his Obama Friend's tales.'

Olayinka said 'it is funny that Fayemi lied to Ekiti people before he assumed office; claiming to be friend of President Barrack Obama, lied for four years as governor and he is still lying, six months after Ekiti people chased him out of office with their votes.'

The governor's aide, who said Fayemi's claim that he had paid all contractors, including the one handling Ado-Iworoko-Ifaki road was illogical, added that; 'If Fayemi had paid the contractor handling Ado-Iworoko-Ifaki road as he claimed, why was the troubled spot in front of the State Hospital not fixed? And why didn't Fayemi, himself arrest the contractor for refusing to move to site?'

Speaking further, Olayinka said; 'It is on record that apart from debt of over N86 billion, with which Fayemi mortgaged Ekiti State till year 2020, August and September salaries of workers were left unpaid, four months deductions for workers Cooperative Societies and Union Dues were not remitted while pension and gratuity were not paid.'

He said; 'If Fayemi could admit that Fayose left N3.5 billion in the State treasury in 2006 when the State allocation was less than N2 billion monthly, shouldn't Fayemi be ashamed of himself that despite that his government received as much as N9 billion as monthly allocation, he left behind over N86 billion debt?

'The truth is that Fayose left N10.4 billion in the State treasury in 2006. But even by Fayemi's admission, Fayose left N3.5 billion for his successor while he (Fayemi) left over N86 billion debt for his own successor. Isn't that shameful?'

Olayinka said as at the time Fayemi was leaving, Ekiti State Government was indebted to the tune of N86, 013,689,097.

Olayinka concluded that Governor Fayose will not be distracted by the ranting of Fayemi and his party, adding that; 'If Governor Fayose, who has spent just two months in office gave Ekiti people 'oromodiye' (as the APC called it) to celebrate Christmas and they appreciated it, it means that Fayemi did not give them a single egg throughout the four years that he was governor.'