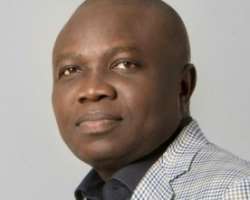 The Lagos State governorship candidate of the All Progressives Congress, Akinwunmi Ambode, has alleged that the Federal Government owed the state N51bn.

Ambode, who is a former Accountant-General of the state, said this during the '10,000-man March' organised by the Ambode Youth Initiative in Lagos on Saturday, adding that there has been no meaningful federal project in Lagos State since 1999.

'If you want heavy traffic on the Third Mainland Bridge to stop, ensure that the APC gets to the centre. They (Federal Government) don't allow us to make any meaningful changes on that bridge.

According to the governorship candidate, having worked as a civil servant for 27 years, he understood the workings of the state. He therefore urged the people of the state to vote for experienced people and not beginners.

He said he was a grass roots politician, adding that he had worked in the local government service for 10 years and was at various times the council treasurer in Alimosho, Somolu, Mushin and Ajeromi-Ifelodun local government councils before rising to become the youngest ever auditor-general for local government in the state.

He said he would ensure job creation in Lagos and improve security, which he stated was already being taken care of by the Lagos State Security Trust Fund.

'We will work on the areas that are pinching you. We will work on entertainment, arts, sports and hospitality sectors so that if you can't get a white-collar job, we can create jobs for you in these sectors.

'We will create an employment trust fund just like the Lagos State Security Trust Fund which we have been using to keep the people of Lagos safe. The Peoples Democratic Party has not been able to keep Nigeria safe and they want us to hand over Lagos to them,” Ambode stated.

Also on the occasion, a former member of the Lagos State House of Assembly, Abdulateef Abdulhakeem, said Ambode was the most qualified person to rule Lagos.

He said when former President Olusegun Obasanjo had failed to release federal allocations to the state for several months, Ambode devised a financial mechanism which raised the state internally generated revenue.