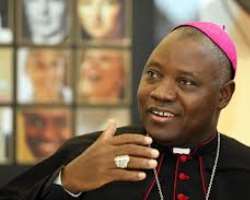 The Catholic Archbishop of Jos, Most Rev. Ignatius Kaigama, on Friday donated relief items worth N1 million to the inmates of Jos prison.

The Archbishop was represented at the occasion by Rev. Fr. Stephen Aster, the Assistant Coordinator, Justice, Development and Peace Commission in the diocese.

Kaigama said the donation, comprising two cows, bags of rice and detergents, was a show of love which Christmas preaches. He said the season preaches love and sharing with the less privilege, explaining that the items were meant for all inmates, not minding their religious affiliation.

According to the Archbishop, the items to the prison community, is his show of love and concern for all the inmates. 'This is Christmas period, and the coming of Christ signifies care and sharing with those who do not have in the society. 'One must not have in abundance before he remembers to share with those that don't have, but the little one has, if shared with good intentions, sure, he has exhibited what the coming of Christ symbolises at Christmas,' he said.

Kaigama said his gesture was to show the inmates that they were not forgotten, even as they were temporarily cut off from their normal ways of life, and urged them to remain steadfast in prayers.

He also called on spirited individuals to emulate his gesture and show love to the inmates in whatever measure as they could. Receiving the items, the Deputy Controller of Prisons in-charge of Jos prison, Mr James Lander, applauded the magnanimity of the bishop.

According to him, the kind gesture would give the inmates a sense of belonging. NAN